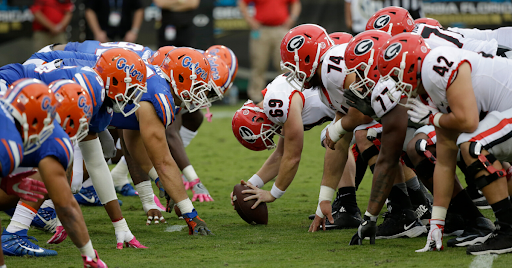 Nothing says fall in Jacksonville quite like Florida-Georgia weekend, and the game is back in full force this year as the two teams square off Saturday.

The 2021 season has gone in two very different directions for the Florida Gators and the Georgia Bulldogs, but that doesn’t take away from the drive to win this heated rivalry game. Despite high expectations, the Gators have suffered three early losses. Meanwhile, Georgia has established themselves as the nation’s most dominant team.

For Florida, a win on Saturday could change the course of their season. Not only would it help get things turned back in the right direction, but it would also spoil a potential undefeated campaign for their rivals. Dan Mullen, head coach of the Gators, could certainly use a big win as his job security is currently up in the air.

One interesting note about this game is the quarterback situations on both sides. Fans could see multiple QB’s take the field for both teams. It’s a vastly different situation for each squad, though.

Georgia’s quarterback conundrum features two polar opposites: former big-name transfer JT Daniels and former walk-on Stetson Bennett. Daniels was sidelined with an injury, allowing Bennett to slide back into the role of starter. With Daniels returning to playing form, though, does head coach Kirby Smart dare mess with the current rhythm under Bennett?

For the Gators, the QB question has been raging all season. Emory Jones waited his turn and has played great, but Anthony Richardson has wowed fans in his limited reps. Mullen confirmed that they would be utilizing both quarterbacks this weekend, something they’ve done all season.

Georgia’s defense has cemented its place as the most feared in college football, something that could spell trouble for Florida. The Gators will have to get creative on offense because it’s hard to imagine their defense will outplay the Dawgs.

The game will start at 3:30 p.m. on Saturday at TIAA Bank Field, home of the Jacksonville Jaguars. For those attending, the weather should be nice but could get chilly once the sunsets. For those who can’t make it, the game will be broadcast on CBS.

Last year’s dominant 44-28 win for the Gators snapped a three-year losing streak to the Bulldogs, but they’re going to have an uphill climb if they don’t want to start a new one. With this being such a great rivalry, it’s sure to produce a fun contest either way.