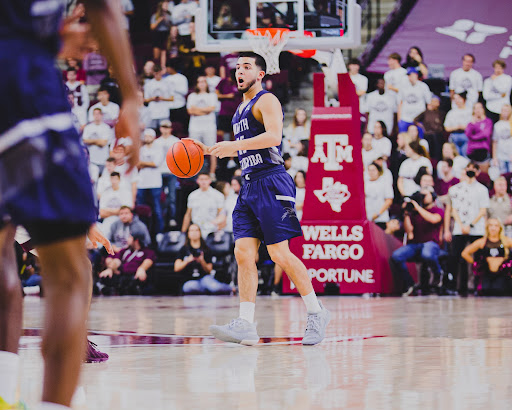 UNF guard Jose Placer dribbles the ball up the court on Wednesday against Texas A&M (Photo by Jeremiah Wilson).

The Ospreys didn’t get much rest after their season opener, as this was their second game in two days. Even with the opener on Tuesday also being played in Texas, the team made a trip of over 400 miles from Lubbock to College Station, the site of Wednesday’s matchup.

The Aggies got off to a fiery start, grabbing an 8-0 lead. It took some time, but the Ospreys worked their way back into the game, tying the game 13-13 with a Carter Hendricksen three-pointer. From this point forward, things would remain competitive until the last few minutes.

Texas A&M regained their lead, but UNF kept it close and didn’t allow the Aggies to open up a big gap. The Ospreys even took the lead with a little over six minutes remaining in the half, something that wouldn’t last long.

A&M took back the lead, but the Ospreys would claw back once again to take possession of the advantage with two minutes left in the first half. This would be the last time they did this, though, as the Aggies pulled away to lead 36-32 at the half.

From here on out, the Ospreys were stuck in a never-ending game of keep-up. They managed to keep the deficit down to single digits for most of the second half, but UNF just couldn’t play clean enough to allow them to come back.

The X-factor of the game by far was Texas A&M’s Henry Coleman III. The forward transferred from Duke after last season and was a thorn in the side of the Ospreys on Wednesday. The Virginia native torched UNF for 27 points, 19 of which came in the first half.

Offensive production was few and far between for UNF, only putting up 46 points in the loss. Carter Hendricksen led the team in scoring again, accounting for 14 points. The lack of continuity and sloppy play on the offensive end contributed to the 64-46 loss.

UNF was plagued by turnovers, committing 29 of them in total. UNF Head Coach Matthew Driscoll also addressed the offensive breakdown in the second half. “We played at a high level offensively when we found shots, and for whatever reason, we stopped doing that,” Driscoll said postgame.

The hits don’t stop coming for the Ospreys, as they travel to Phoenix to take on Grand Canyon University on Friday. The team’s notorious student section, the GCU Havocs, is sure to make for an exciting environment. The game begins at 9 p.m. and can be streamed on ESPN+.