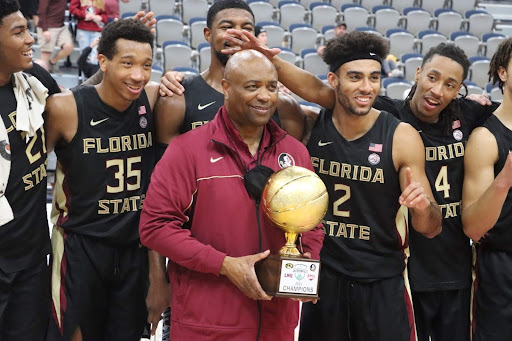 The Jacksonville Classic took place this past weekend on campus, producing plenty of action on the court for a national audience.

The tournament consisted of two brackets of four teams each. The first bracket was the Jax Bracket, including Boston University, Northern Illinois, Little Rock, and Sam Houston State. The headliner was the Duval Bracket, made up of Florida State (FSU), Mizzou, Southern Methodist University (SMU), and Loyola Marymount (LMU).

Later Sunday, the bigger names took the court as the Florida State Seminoles faced Loyola Marymount in front of a pro-FSU crowd. It was a lively atmosphere as things got underway Sunday evening. Things were tight in the opening minutes, but FSU ultimately pulled away to win 73-45.

The final matchup on Sunday determined who FSU would face in the Duval Bracket championship game. The Mizzou Tigers faced off with the SMU Mustangs in the most exciting game of the tournament. It went to overtime, with Mizzou ultimately prevailing 80-75.

The second consolation game was also a close one, as the similarly-acronymed teams of SMU and LMU squared off to finish off with a win. The Lions of LMU squeaked out a tight 76-70 win, ending their time in Jacksonville on a good note.

Now came the time for the main event, the Duval Bracket championship match. Mizzou suffered a rough loss to UM-Kansas City earlier in the season, but a win on Monday over an accomplished FSU squad could help turn the tides.

This wasn’t in the cards for the Tigers, though, as Florida State took the crown in a convincing 81-58 win. Anthony Polite led the way for the Seminoles with 14 points, shooting six for nine from the field.

With FSU’s win, the tournament came to a close. This was the tournament’s first time taking place in Jacksonville, serving as a great opportunity for UNF to put the school’s name out there. All games took place at UNF Arena, with games from the Duval Bracket being broadcast nationally on CBS Sports Network.

With this tournament under UNF’s belt, this could open the door for the university to host more similar events in the future. UNF Arena will now shift its purpose to serving as the site of Osprey home games, plenty of which are soon on the radar.