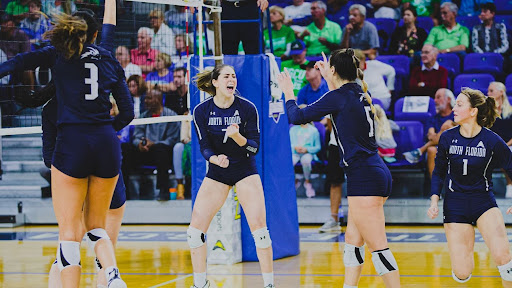 Solimar Cestero (7), Julianna Askew (5), and teammates celebrate after a kill during the ASUN tournament. Photo by Jeremiah Wilson.

After suffering a heartbreaking loss in the ASUN conference tournament, the Ospreys bounced back and are rolling through the National Invitational Volleyball Championship.

UNF’s run for the conference title came up short after losing to FGCU in November. In past years, this would’ve wrapped up the season. The 2021 season has been different, though, as the Ospreys are still fighting for a championship.

The National Invitational Volleyball Championship (NIVC) is exactly what it sounds like: a postseason volleyball tournament in which qualifying teams are invited to compete.

While these teams aren’t fighting for the overall National Collegiate Athletic Association (NCAA) championship, tournaments like these serve as a great opportunity for smaller schools to compete in the postseason even if they didn’t win their conference. Without the automatic bid gained from a conference championship, many smaller-conference schools like UNF are swept under the rug when the field is set for the NCAA tournament.

The tournament began with 32 teams, and got off to the smoothest start the Ospreys could ask for. The squad was able to advance to the second round without even stepping foot on the court, as UNC-Greensboro withdrew following COVID-19 related issues.

Up next was a road matchup against the Troy Trojans in Alabama. The smooth sailing continued for the Ospreys, as it was apparent early on that Troy would have to fight for their tournament lives.

UNF took the opening two sets by identical scores of 25-19. One more set win would advance the Ospreys into the next round. They did just that, taking the third set 25-14 to sweep the Trojans three sets to none.

This win sent the Ospreys into the NIVC quarterfinals, meaning they are one of eight remaining teams. Their next challenge will involve a trip to Storrs, Conn., where they will face the UConn Huskies.

The Huskies are nationally known for their dominant basketball teams, but the volleyball squad has had a solid season of their own. UConn is 23-10 and is coming off of a huge road win against regional rival Boston College.

The match will take place on Thursday, Dec. 8 at 7 p.m. Osprey fans can stream the action, assuming they aren’t able to make the thousand-mile trip.