Ospreys take down Austin Peay with career day from Placer 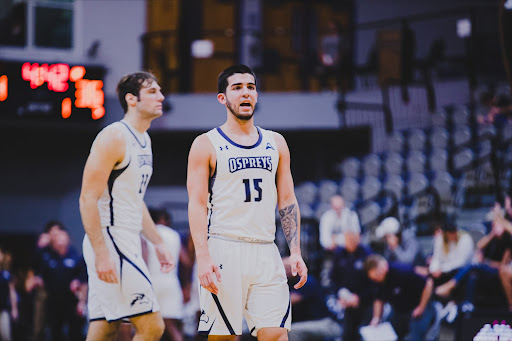 UNF guard Jose Placer led the way for the Ospreys on Saturday with a career-high of 35 points. (Photo by Jeremiah Wilson)

It was an afternoon to remember for UNF guard Jose Placer, as he led the Ospreys to their third win of the season on Saturday.

This weekend’s home duel with Austin Peay State University served as an opportunity for UNF to bounce back from a rough loss to Florida on Wednesday. Points have been hard to come by for the Ospreys in their last two games, but Saturday proved to be anything but.

The Ospreys led early, but this wouldn’t last. The APSU Governors struck back, building a 10-point lead of their own midway through the first half. At times this season, similar situations have been perilous, but things were different this time.

UNF dug in and fought to regain a 45-40 lead going into halftime. While the lead wasn’t large, 45 first-half points was a sight for the sore eyes of Osprey fans. In last week’s loss to FAU, UNF only scored 41 points in the entire game.

Things remained close early on in the second half, but UNF went on a run to seize the momentum. The Governors refused to let down their fight, though, rallying back to within two points with eight minutes left in the game.

Austin Peay hung around, but some clutch free throws at the end helped secure a 91-84 win for the Ospreys.

One stat that helped propel the Ospreys to victory was efficiency at the free throw line. “I tell these guys all the time, five to seven games will be decided by free throws,” UNF Head Coach Matthew Driscoll said.

While the Ospreys won on paper, they may have taken a serious loss in regards to personnel. The team’s leading scorer, Carter Hendricksen, left the game just two minutes after it started with an apparent back injury. He did not play for the remainder of the game and a timetable for his return is unknown.

Stepping up in response to Hendricksen’s absence was Jose Placer. The UNF guard splashed in seven three-pointers en route to a 35 point performance, a personal career high.

This win was especially significant due to Austin Peay joining the ASUN conference next year. Matthew Driscoll addressed this postgame.

“We told them right after Florida… this is a league game,” Driscoll said. “[It’s like] we had our first league game of the year.”

After two blowout losses, a win against a quality Austin Peay team was just what the doctor ordered. The Ospreys will now look to build a winning streak with their next game coming against Trinity Baptist on Saturday, Dec. 18.