The Golden Months: A story of Urban decay in Jacksonville 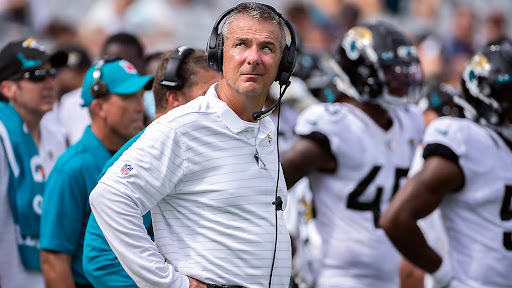 Jacksonville Jaguars head coach Urban Meyer watches a play on the video monitor during the second half of an NFL football game against the Denver Broncos, Sunday, Sept. 19, 2021, in Jacksonville, Fla. (AP Photo/Stephen B. Morton)

After only 13 games and a plethora of controversy, the Jacksonville Jaguars have had enough of Urban Meyer.

News broke in the early hours of Thursday morning that Meyer’s roller coaster of a tenure with the Jags had come to an end. Team owner Shad Khan released a statement regarding the decision.

“After deliberation over many weeks and a thorough analysis of the entirety of Urban’s tenure with our team, I am bitterly disappointed to arrive at the conclusion that an immediate change is imperative for everyone,” Khan said.

As for the rest of the season, offensive coordinator Darrell Bevell will act as interim head coach. This in itself is an interesting move, as the offense has suffered the vast majority of performance-related criticism thrown at the team.

While a 2-11 record certainly didn’t help, a bounty of issues outside of the game hovered over Meyer during his time in Jacksonville. What exactly went wrong in the past 11 months that led to this?

Following former head coach Doug Marrone’s departure, a coaching search ultimately resulted in the hiring of Urban Meyer, who had been wildly successful in his stints at the University of Florida and Ohio State University. While he didn’t have any experience as a coach at the pro level, many assumed that success would follow.

These optimists were quickly proven wrong. In one of the few games that were thought to be winnable, the Jaguars looked entirely lost in their season opener against the Houston Texans. From here, four more losses followed. While there was the occasional bright spot, it was largely a mess.

Things changed soon with a win over the Miami Dolphins in London, but the subsequent high hopes would come spiraling back down to earth quickly. In a game that the Jaguars should’ve been able to compete in against the Seattle Seahawks with backup quarterback Geno Smith, they lost 31-7.

In nothing less than a massive surprise, the Jags followed this up with a shocking win over the Buffalo Bills, who were viewed as one of the best teams in the NFL. After this victory, Meyer ended his career in Jacksonville with five straight losses.

Tension had been brewing throughout the organization seemingly all year long. From the incident at the Ohio bar, following a week four loss to the Bengals, to allegedly calling his coaches “losers,” Meyer simply couldn’t manage to keep his job with the lack of on-field results factored in.

Going into Meyer’s hiring, many viewed the decision as an experiment. As with any experiment, there was a chance things could go wrong. However, it would’ve been hard to predict things going as horribly as they did.

Meyer did make history, though, becoming only the fourth head coach in NFL history to not make it through his first season. It’s safe to say that the experiment did not go according to plan.

In a tale as old as time, the Jacksonville Jaguars are once again searching for a new head coach. After the Urban Meyer catastrophe, it wouldn’t be surprising if Khan goes in a more conservative direction, hiring someone with proven NFL success.

The excitement of Meyer’s hiring, combined with quarterback Trevor Lawrence being acquired in the draft, led to unmatched excitement for Jaguar fans going into the 2021 season. Following another dismal campaign, though, the team will need to make a big splash in free agency to show that they’re committed to winning.

All in all, the Urban Meyer experience was rough, but far from forgettable. There was a new damning headline regarding the coach seemingly every week. Ironically enough, the final one involved him allegedly kicking former kicker Josh Lambo.

For a team that’s lost roughly three-fourths of their games since Khan purchased the team, what’s one more demoralizing season? In a dilemma that fans are used to, they will merely have to hope for better luck next year.