Late miscues drown Ospreys’ chance to take down the Dolphins 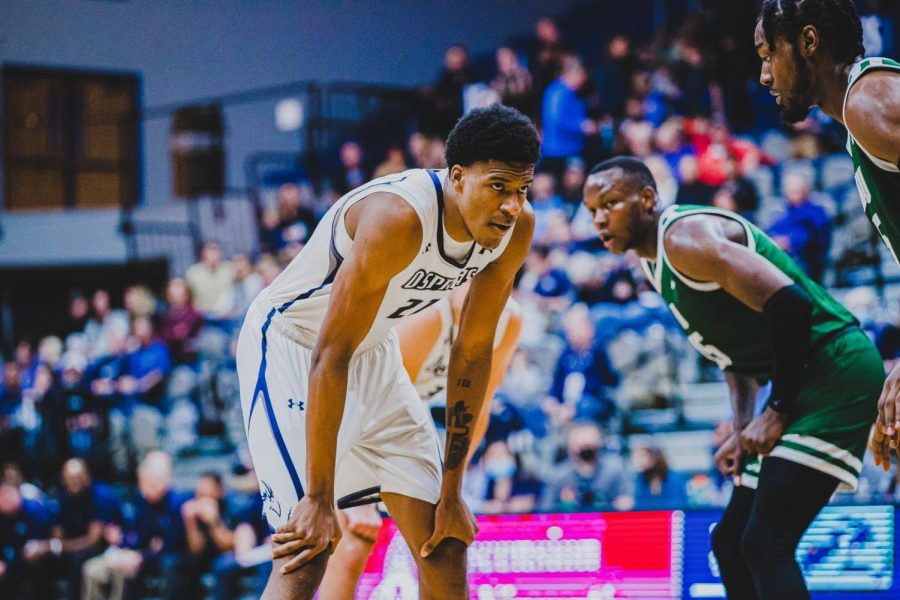 Losing in a blowout is rough, but on the last play of the game? That’s heartbreak.

Read that again. Now imagine it happening two weeks in a row. Unfortunately for Osprey fans, this is no matter of imagination, but rather a brutal reality.

UNF got off to a rough 0-3 start in conference play, but they had a chance to turn things around in the first River City Rumble matchup of 2022 against Jacksonville University.

The Ospreys had taken four of the last five meetings, but the JU Dolphins entered Saturday’s meeting with an impressive 10-4 record on the season. This is not the same JU program that fans have witnessed over the past few years. New head coach Jordan Mincy has been turning things around across town.

Because of this revamp of JU basketball, the Ospreys entered this duel knowing it would take everything they had to come away with a win. Ultimately, they would come up just short of this demand.

The first half was an offensive clinic — of what not to do — for both teams. Each squad alike shot less than 32 percent from the field during the first twenty minutes of play. Due to this, things were tight early, with UNF taking a three point lead into halftime.

The shooting struggles didn’t end in the first half for the Ospreys, though. A common theme of the disappointing losses in ASUN play so far has been the drought of three-point shooting. In the previous three games, UNF shot 22 percent from beyond the arc. On Saturday, things were even worse.

When a program is built on three-point shooting, a 12 percent success rate against a talented rival squad simply doesn’t cut it. Only making 3 of 25 attempts from deep wasn’t the only reason UNF lost, but it was yet again a contributing factor.

UNF Head Coach Matthew Driscoll is well aware of the struggles, citing them postgame. “All of a sudden, we’re making less than five [three point shots] a game in the league,” Driscoll said. “At the end of the day, we gotta keep taking shots.”

In a game as close as this one, every shot counts. It became apparent that this would be the case as the minutes winded down.

UNF’s small lead slowly eroded throughout the second half, with JU eventually taking the lead. While things would stay close, the Ospreys just couldn’t regain control of the match.

With under a minute remaining in the game, the Dolphins held a one-point lead. The Ospreys found themselves with a chance to take the lead with less than twenty seconds left. UNF forward Dorian James received a pass from guard Jose Placer and drove to the basket. Could this be the game winner?

JU’s clutch help-side defense intervened to make sure it wouldn’t be. The ball was stripped and the Ospreys were forced to foul in order to extend the game. Unfortunately for them, JU guard Jordan Davis sank both free throws to increase the Dolphin lead to three points.

With only two seconds left, UNF had one chance to send it to overtime. The task: get the ball down the court and convert a three pointer, something they had only successfully done three times to that point.

The ball was launched the length of the court, with UNF forward Jonathan Aybar catching the pass. Check. The next step would be the hardest: making the shot.

As the ball left Aybar’s hands, UNF students behind the basket were fooled by a cruel optical illusion. What looked like a good shot actually caught the front of the rim, falling short. A grim silence fell over the Osprey faithful as JU players mockingly waved goodbye.

Just seven days after an overtime loss to Stetson on a buzzer beater, UNF couldn’t turn the tables to do the same against JU to give themselves an extra five minutes. This 54-51 loss drops the Ospreys to 4-13 on the season and, more importantly, 0-4 in ASUN play.

In his postgame press conference, Coach Driscoll alluded to the importance of defense in the low-scoring battle. “It came down to we just didn’t get enough stops in the second half,” Driscoll said. “We allowed them to do certain things and we didn’t respond well enough.”

Once again, the Ospreys won’t have much turnaround time following this rough loss. The team will be back in action Monday night against Kennesaw State at 7 p.m. The KSU Owls will likely prove to be another tough test, having won their first two ASUN games by an average of 26 points.

There’s a solid chance UNF rights the ship and gets things turned around. But if things continue the way they have been in ASUN play, the Ospreys could be in for a rough season.