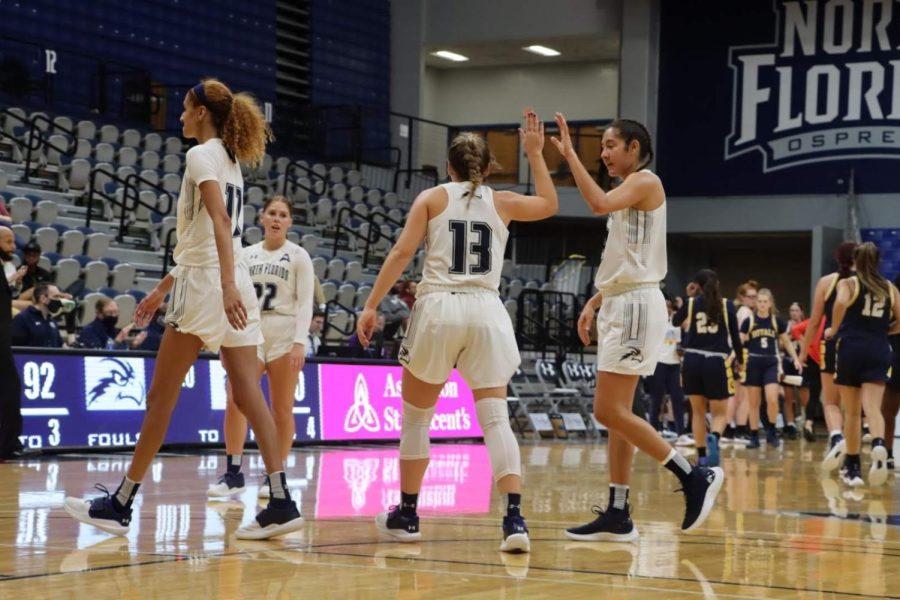 Conference play has gotten off to a rocky start for both of UNF’s basketball teams, but the women’s squad broke through to pick up the first ASUN win of the season on Wednesday.

Wednesday’s matchup was the second time this week that UNF Arena played host to Kennesaw State University. After a solid win at Florida A&M in December, the Ospreys dropped their next four games. This came to an end against the KSU Owls, largely thanks to a clutch performance by a team veteran.

The game got off to a less than ideal start for UNF. The Ospreys saw only five shots fall in the first quarter, leading to the Owls securing a 17-12 lead after 10 minutes of play. Things wouldn’t last this way much longer, though.

The Ospreys stepped up defensively, holding the Owls to under 17 percent shooting from the field for the rest of the half. They took advantage of this on the offensive end, too, outscoring KSU 22-6 during the second quarter. This gave the Ospreys a 34-23 lead going into the halftime break.

This trend continued into the second half, with the Ospreys growing their lead to an unmatchable height. A key factor in this success was three-point shooting. The team hit on nearly half of their attempts from deep. Leading the stat columns was veteran UNF guard Rhetta Moore.

As per usual, Moore exhibited great efficiency while on the court. She accounted for five three-point makes, racking up 22 points in total. Following the game, she credited her teammates for creating these shooting opportunities.

“Instead of having contested shots, they were wide open because a teammate would draw two players,” Moore said. “That makes a difference, for sure.”

Joining her at the top of the scoresheet was fellow veteran, forward Jazz Bond. Bond accounted for 18 points and 8 rebounds en route to the team’s 66-49 victory over Kennesaw State.

This serves as the Ospreys’ first ASUN win of the season, men’s or women’s. With the confidence resulting from this win, the squad will look to build on this momentum when they face Eastern Kentucky on Saturday at 4:30 p.m.