Shorthanded Ospreys squad gives Florida State everything they can handle 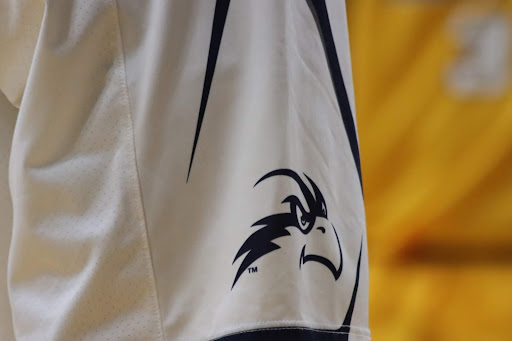 It's all in the details. A close up look of the UNF logo on a pair of basketball shorts.

Despite missing two star players, and later losing another key contributor, the Ospreys put up a strong showing against Florida State on Thursday afternoon.

Surely, things couldn’t get worse, right? Minutes into the start of Thursday’s game, UNF forward Jonathan Aybar was assessed a flagrant foul, disqualifying him from the game.

Despite all odds, the Ospreys were in the game. FSU had just defeated No. 6 Duke on Tuesday, and here they were on the ropes against an undermanned UNF team.

Many of UNF’s previous appearances had been low-scoring affairs, however, Thursday was anything but. Things remained close early in the second half, with the Ospreys narrowing the deficit to three points.

This didn’t last too long, though, as the Seminoles went on another punishing run. FSU opened their lead back up to 72-56, and would comfortably close out the game from there. UNF got the deficit back within single digits, but nothing would ultimately come of this, as FSU took the contest 86-73.

While another loss is by no means desired, this one had a lot of positive takeaways. UNF guard Jarius Hicklen continued to step up and make an impact in the absence of the team’s leading scorers. Hicklen accounted for 27 points on Thursday, hitting six three-pointers along the way.

Another takeaway was improved three-point shooting. The team started off ASUN play with disappointing results from deep, but the Ospreys shot 58 percent from three against the Seminoles. If they can continue to shoot anywhere close to this number, wins are surely on the way.

UNF Head Coach Matthew Driscoll appreciated his team’s effort, but he realizes there is still work to be done. “We can’t just rest on our laurels and say, ‘Hey, we’re back.’ Because we’re not,” Driscoll said following the game.

The Ospreys will look to pick up their first conference win on Saturday as they hit the road to face Eastern Kentucky. The game starts at 7 p.m. and can be seen on ESPN+.