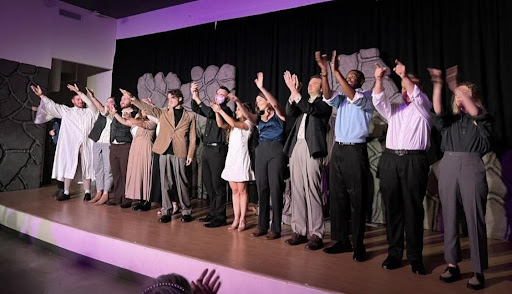 (Above) The cast of Hamlet receives applause from the audience after their performance at MOCA Jacksonville. Photo courtesy of Dr. Maureen McCluskey.

For the last week, UNF Shakespeare has been performing Hamlet to audiences in MOCA Jacksonville and UNF’s Lazarra Theater, respectively. Their production is unique in that students were integral in every element of the design process, as well as the performance itself.

As an example of the creative freedom afforded to students, this production is set in the 1960’s, a clear variation from the play’s typical setting- Denmark in the late Middle Ages. Cast members have been working around two to three days per week for four to five hours each day. The cast is hopeful that audience members will be able to see the full extent of their efforts into the production when they see the show.

The production is co-directed by Dr. Maureen McCluskey, Visiting Instructor for the Department of English. Dr. McCluskey has been involved in theater at UNF since 2017 and has spent several years working as an advisor for Swoop Troupe, UNF’s flagship drama club. She particularly enjoys theater because it provides an opportunity to involve students of various majors and experiences.

Shakespearean plays, because they are royalty-free, provide students, particularly English majors, an opportunity to adapt scripts and flex their own creative muscles, as seen with this production of Hamlet. Dr. McCluskey is proud of the cast’s work in this production. Specifically, she is excited about her choice of actors, calling their performance a “good, dark rendition [of Hamlet].”

Christina Brennan, a second-year student majoring in film and graphic design with a minor in acting, plays Queen Gertrude in the production. She has been acting “on and off,” as she puts it, since fourth grade. She credits her involvement in UNF Shakespeare to Dr. McCluskey. “100 percent,” she adds.

According to Christina, Dr. McCluskey encouraged her to audition for a role in the production. She lauds Dr. McCluskey for her patience, her mentorship and capacity to be a role model in the field of theater. For Christina, two words sum up Dr. McCluskey- “the best.” Christina’s favorite part of being a cast member has been getting to know the rest of the cast and crew. “Everyone brings something to the table,” she explains.

Overall, the cast of Hamlet hopes audiences will enjoy the show. They are optimistic that, by performing a production from the originator of theater, viewers will be able to appreciate the beauty and complexity of the language and emotions conveyed in the show. Even though the dialogue itself can be difficult to understand (as everyone who has read Shakespeare can attest to), the cast promises that, by seeing the play, audiences can connect to the characters and story on a more human level. Cast members are also appreciative of how Shakespeare can face modern issues in his plays, particularly mental health, showing that the works of Shakespeare still hold great relevance in the 21st century.

UNF Shakespeare’s next performances are on Saturday, Jan. 22, and Sunday, Jan. 23, both at 2:00 pm. in the Thomas G. Carpenter Library. Admission is free for all UNF students. An ASL interpreter will also be present for the entirety of both performances.