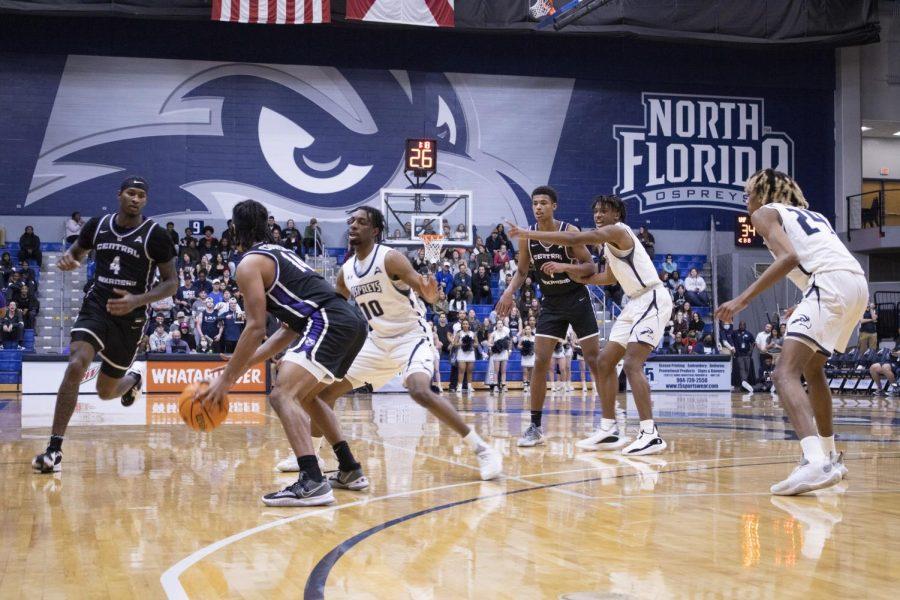 Joy filled the air as the clock hit zero. The Ospreys had finally done it— they won a conference game.

While this moves the team’s record to just 5-16, no one seemed to care. A raucous student section had just witnessed the first ASUN win of what has been a disappointing season for the UNF men’s basketball team, and they were eager to celebrate.

The Central Arkansas Bears entered Thursday’s matchup 6-12, but with three wins in ASUN play. After six straight losses to open the conference slate, the Bears served as a great opportunity for the Ospreys to snap this skid.

The scoring got started quickly, with Carter Hendricksen banging in a three-pointer seconds after the opening tip. This was significant, as Hendricksen had missed the last few games with an injury. While the veteran didn’t run up the scoring column, his impact was critical on the boards.

The score stayed close throughout the first half, with Central Arkansas occasionally opening up their lead a bit. The Ospreys were able to close things up late, though, narrowing their deficit to just two points going into halftime.

In a sport as intense as basketball, it’s easy to lose sight of the light-sided nature of the game. This concept was highlighted by a love-hate relationship that formed between UNF students and Central Arkansas player Jaxson Baker.

After mass distribution of a Baker Instagram selfie from 2013 throughout the student section, the two parties began a long night of back-and-forth banter. Emotions ranged from ‘We want Jaxson!’ chants to those of ‘Airball!’ after a missed shot, and so forth.

Despite the cordial bonds formed between fans and players alike, there was still another twenty minutes of basketball to be played.

Less than a minute into the second half, the Ospreys took the lead. They wouldn’t relinquish it for the rest of the game, either. As three pointers began to fall, UNF’s lead continued to grow.

The lead wasn’t insurmountable, though, meaning that UNF couldn’t take their foot off the gas. The shots kept falling, and the lead eventually ballooned out of the Bears’ reach.

UNF guards Jose Placer and Jarius Hicklen led the charge, netting 24 points each. The two shooters accounted for 10 made three-pointers, with the team hitting 14 in total. This marks the fourth straight game that Hicklen has scored in double figures, highlighting his rapid burst onto the scene.

A 93-74 win not only served as UNF’s first in ASUN play this season, but it was the first win the Ospreys have picked up in well over a month. They will have a chance to build on this momentum as they host Lipscomb on Saturday. The game begins at 5 p.m. at UNF Arena.