Ospreys continue to roll, down North Alabama in road win 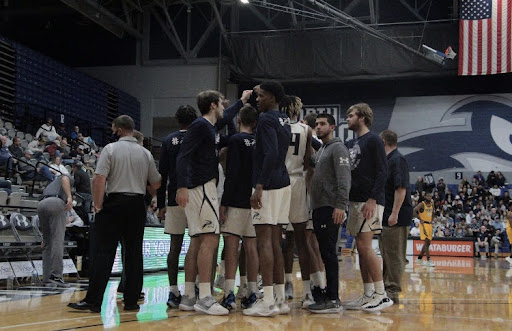 FLORENCE, Ala. — A win on Saturday marked an accomplishment for UNF men’s basketball that they haven’t experienced this year: winning consecutive games against Division I opponents.

The Ospreys were fueled by 20-point performances, courtesy of guards Jose Placer and Jarius Hicklen. This backcourt duo has proven effective lately, particularly with Hicklen’s emergence.

These performances were especially needed due to the absence of forward Carter Hendricksen. Hendricksen went down with an injury against Jacksonville State on Thursday, but stayed in the game. He was not active for Saturday’s match, though, leaving a void in UNF’s core.

The Ospreys squared off with North Alabama (UNA), the team that knocked them out of last season’s ASUN tournament. Saturday’s bid for a revenge win looked good early on, with UNF jumping out to a 9-2 lead.

The Lions of North Alabama struck back, taking the lead with just under 12 minutes remaining in the first half. A back-and-forth affair soon emerged, with the Ospreys securing a 32-27 lead going into halftime.

UNF got off to a hot start in the second half, breaking out to a double-digit lead five minutes in. From here on out, it was mostly smooth sailing for the Ospreys, cruising to a 71-58 win.

A key in holding onto the lead was UNA’s lack of ability to make shots in the second half. The Lions only converted on 10 of their 33 shot attempts. When your opponent is rolling like UNF was, that’s not going to cut it.

Standing in stark contrast to UNA’s shooting struggles, Hicklen was feeling it from deep. The UNF guard knocked down six three pointers to propel the Ospreys to their second consecutive win.

UNF has only had one other multi-game winning streak this season, but this is the first time they have taken down two Division I teams in a row. The trip to Alabama proved successful, but they will have to prepare to face a talented Bellarmine team at home on Wednesday.

The game starts at 7 p.m. at UNF Arena. Students get in free and the game can also be streamed live on ESPN+.