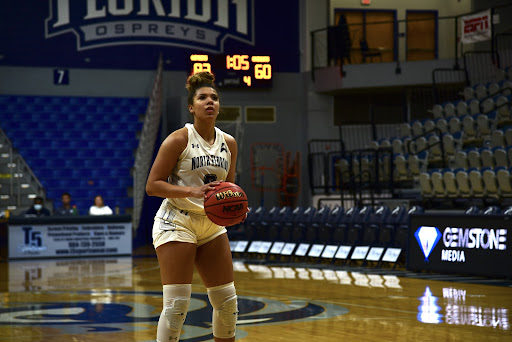 Things haven’t gone the Ospreys’ way as of late, dropping some close games in the final minutes. They didn’t have to worry about this on Wednesday, though, as they dominated the Knights of Bellarmine University with relative ease.

While the Ospreys walked away with a 22-point win, the game was much closer early on. UNF held a small 20-18 lead after the first quarter but opened it up to a slightly larger six-point lead going into halftime. One reason for the tight game was the three-point shot. The Ospreys only netted four makes from deep in the first half, something that would change later on.

The Ospreys came out of the locker room firing, shooting over 50% from three-point range. A key contributor to this shift was UNF guard Jaida Bond, who scored a season-high 18 points on Wednesday. The junior hit three of these shots from deep, helping the team open up a lead.

Team chemistry is incredibly critical in all sports, but especially in basketball. This is something that fifth-year senior guard Rhetta Moore believes helped in Wednesday’s win.

“Even through the lows and the highs, coming together and sticking together builds that chemistry and builds that resilience,” Moore said. “I think if it was perfect, we might not have the tough conversations that we have to have.”

UNF Head Coach Darrick Gibbs seconded this notion following the game. “I thought we played very connected on both ends of the floor,” Gibbs said. “We shared the ball pretty well, took good shots, and defensively we covered for each other.”

The strong UNF run to start the third quarter proved to be the nail in the coffin for Bellarmine. The Knights entered the meeting with a record of 3-18, winless in conference play. Not much changed, other than adding another loss to that record.

The small lead that UNF initially held grew throughout the match, eventually ballooning into an 85-63 win for the Ospreys. The points total may not catch many eyes, but the effect that UNF guard Ally Knights had was obvious on the game. The Australian assist machine was back at it on Wednesday, finding her teammates for seven successful shots.

While the win was certainly a positive, tough games lie ahead. After a road match with Kennesaw State, the Ospreys face the gauntlet of their schedule. They return home to face a 21-2 Liberty squad, before facing nationally-ranked Florida Gulf Coast on Senior Day. It may be a daunting task, but the Ospreys believe that the momentum from Wednesday’s victory can propel them through these trials.

“Hopefully, [we can] build on this and keep it going throughout the season,” Moore said. Gibbs added to this, saying, “Hopefully our growth continues as we go into this weekend.”