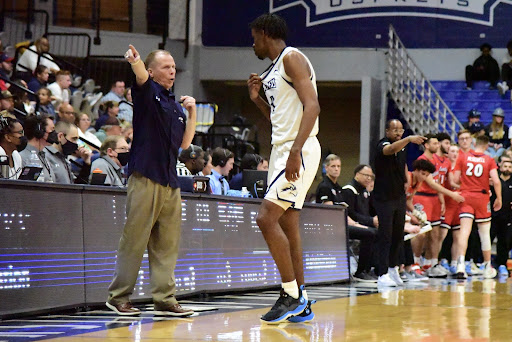 These fans have been trapped under the fist of the Flames, who have won the ASUN championship for the last three years. Fear no more, though, for the Ospreys have liberated those suffering under the tyranny of the overlords from Lynchburg, Va.

To say that the 2021-22 season has been disappointing for UNF would be quite an understatement. The Ospreys entered Tuesday’s marquee duel with a record of 8-18. To add fuel to the metaphorical fire, UNF was without its two leading scorers, Jose Placer and Carter Hendricksen.

Injuries to key players usually spell doom for teams, but that hasn’t been the case with the Ospreys. Results haven’t always followed, but head coach Matthew Driscoll has seen some of his more recent additions step up and fill this void.

This concept was never more present than on Tuesday when first-year Ospreys Jarius Hicklen and Jordan Preaster combined for 47 points. Hicklen’s contribution was apparent to everyone in the building, as the Texas native dropped 31 points of his own. He confirmed the obvious following the game; he was beaming with confidence.

“Especially this night, obviously I was hot,” Hicklen said with a grin. “The rim just kept getting bigger, so I kept throwing it up there.”

In addition, Tuesday was easily Preaster’s most impactful performance of the season. Almost all of his production came from beyond the arc, with five made three-pointers making up the vast majority of his 16 points. Head coach Matthew Driscoll made it clear that he trusts Preaster to do his thing on the court.

“He was taking the right [shots] and that’s what we want,” Driscoll said postgame. “I’ve never told [him] not to shoot.”

Monumental wins rarely come without any adversity, something that rang true for UNF on Tuesday. Just four minutes into the second half, the Flames opened up an 11-point lead. The Ospreys have let situations like these get out of hand and quickly turn into insurmountable deficits, but they weren’t going to let this happen again.

Thanks to an effective, concentrated defensive attack, UNF was able to extinguish the high-power offense of the Flames. National sensation Darius McGhee still dropped an impressive 28 points, but his performance alone wasn’t enough to carry his team to a victory.

As the clock wound down, the Ospreys found themselves in a spot they haven’t been in many times this year: in control during the closing minutes of a game. Liberty trailed by three with mere seconds remaining. UNF did its job and kept McGhee under wraps, forcing a missed three by forward Shiloh Robinson.

For the second time in the last few weeks, the Ospreys pulled off the unthinkable. The team’s record now sits at 9-18, but they have taken down both division-leading teams in the ASUN. A win this big garnered national attention, as Liberty lost consecutive games for the first time since the 2019-20 season.

In a season full of downs, Tuesday night was one of the biggest ups a fan could ask for. Speaking of fans, UNF Arena was rocking in the closing minutes of the game, despite a modestly-sized crowd. This culminated in students spilling onto the court in celebration once the clock hit zero.

Environment is something that sports teams feed off of, especially in basketball. The Ospreys were grateful for the noise that fans brought all night. Following the storming of the court, the players made their way around the arena as per tradition, thanking fans for showing out.

UNF guard Jordan Preaster on celebrating with the students after Tuesday’s win: “It’s good to see people that we walk around and see out there believe in us just as much as we believe in ourselves.” pic.twitter.com/iw7pvyWadV

The Ospreys will have a chance to ride this wave of momentum into Saturday’s homecoming date with the Eagles of Florida Gulf Coast University. The rivalry game has been designated a white-out, meaning all fans are encouraged to wear white. The festivities begin at 2 p.m. with the women’s basketball game, while the men’s squad follows at 5 p.m.