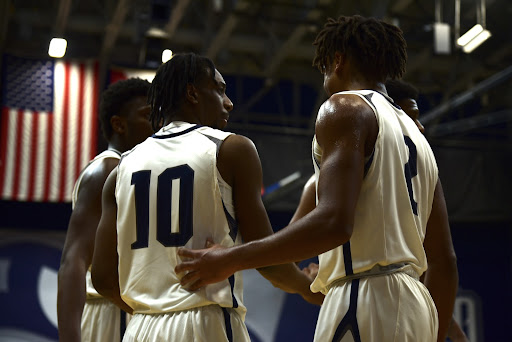 UNF teammates Jarius Hicklen (10) and Chaz Lanier (2) chat during a stoppage in play.

The Ospreys have been on a tear, making in-state foe Florida Gulf Coast University their latest victim in a wire-to-wire win on Saturday.

Anticipation built as lines grew outside of UNF Arena, with an electrical issue to blame for delaying fan entrance. With the tip-off time being pushed back a few minutes, the Osprey faithful filed into The Nest in what was the second-highest attended game of the season.

The first half was arguably some of the best basketball the Ospreys have played all season. Despite leading scorers Jose Placer and Carter Hendricksen being absent yet again due to lingering injuries, UNF came out and put together an impressive first twenty minutes.

Carrying a 38-26 lead into the half, there was an ominous feeling that the Ospreys wouldn’t keep this big of a lead for the duration of the game. If UNF had a nickel for every nailbiter that has taken place at home this year, a football team might finally be on the way.

Sure enough, though, the well would run dry. While the three-point shooting wasn’t incredible in the first half for UNF, it became a disadvantage after the break. The Birds of Trey had to look elsewhere for production, converting just one of 12 attempts from deep in the second half.

UNF Head Coach Matthew Driscoll spoke to his team’s resilience and ability to find a way to follow the game.

“They really, really believe,” Driscoll said. “Because of that, I think it allows us to be great on the defensive end even when the offensive end sometimes isn’t flowing the way we’d like it to.”

The rebounding effort from UNF forward Jadyn Parker was crucial. When shots aren’t falling, rebounding is vital to hang on for a win. Parker’s 10 rebounds helped fend off his FGCU counterpart, Kevin Samuel.

The strong turnout was apparent all throughout the game, with UNF students bringing the noise. Fans can certainly impact a college basketball game, but it’s not often that opposing players acknowledge heckling from a rival crowd. This wasn’t the case on Saturday, though.

Following a dunk, Samuel stared down the UNF student section for what seemed to be an eternity. This unique twist on a Wild West shootout ended after a few seconds, though. Also coming to an end was Samuel’s night after a dangerous foul on Parker. Both players went down, with Samuel being assessed a technical foul.

Samuel’s absence was critical in the final minutes, mightily hindering FGCU’s second-half run. The Eagles were no longer able to rely on their main source of post play, and their momentum suffered as a result.

The closing minutes of games haven’t been much of a strength for the Ospreys this season. They shed this thorn, though, playing just well enough to close out the Eagles. Efficiency from the free-throw line proved vital for UNF, leading to a 70-64 win.

Following the big win, Coach Driscoll took to the microphone to celebrate with fans. This served as a wholesome interaction between the team and its supporters, especially after what has been a rough season.

It’s been quite the week for UNF men’s basketball, taking down ASUN Conference powerhouses Liberty and FGCU at home. Not only does Saturday’s win continue a hot streak, but it puts the Ospreys in a position to potentially secure a home date for the upcoming ASUN tournament.

The Ospreys will be rooting against Kennesaw State a bit harder than usual next week, as some losses by the KSU Owls could help make this home game come true. Granted, UNF still has to do its part and get wins against Jacksonville and/or Stetson for any KSU losses to matter.

This task is much more difficult than merely winning a couple of games, though. Swisher Gymnasium will be rocking on Wednesday, as the Jacksonville Dolphins will look to complete a season sweep of the Ospreys. With wins and Liberty losses, the Dolphins might just have a shot to win the division.

Even if Saturday ends up having been the final home game of the year, it was one for the books.