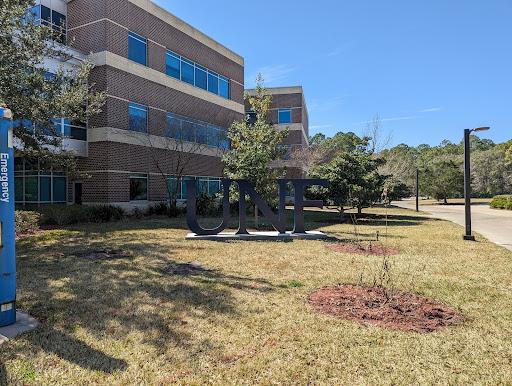 The new sculpture, which in essence is just the “UNF” abbreviation. Photo by Nathan Turoff

Students at the University of North Florida (UNF) were in for a surprise Monday; a brand-new sculpture was installed at the sidewalk intersection between Building 57, Tom and Betty Petway Hall, and the Coxwell Amphitheater. Located very close to the Student Union, students were quick to realize how much of a great photo opportunity was offered by this new sculpture. But where did it come from? Is it permanent?

The sculpture itself is relatively simple in that it is just the dark blue UNF initials, as seen in the monogram of the current UNF logo. Unlike most other stationary sculptures on-campus, there is no plaque or information regarding its origins or purpose at the time of writing. There was evidence of some landscaping work to accompany the sculpture, but nothing else.

Spinnaker reached out to UNF, who provided this statement:

“The idea for the new giant UNF letters came about in early 2020 as planning for the 50th anniversary got started.  The artwork is meant to create a permanent outdoor space for a recognizable on-campus photo opportunity.  The project was funded in thanks to the generosity of over 650 individual donors who contributed to the 50th anniversary celebration.”

Constructed at the tail-end of last week, the sculpture had been in the works for some time, indicated by the many donations contributed. It fulfills the purpose of a great photo spot for touring families, recent graduates, and more. Students should expect its presence for the foreseeable future.