Weaving the tapestry of UNF with Richmond Wynn 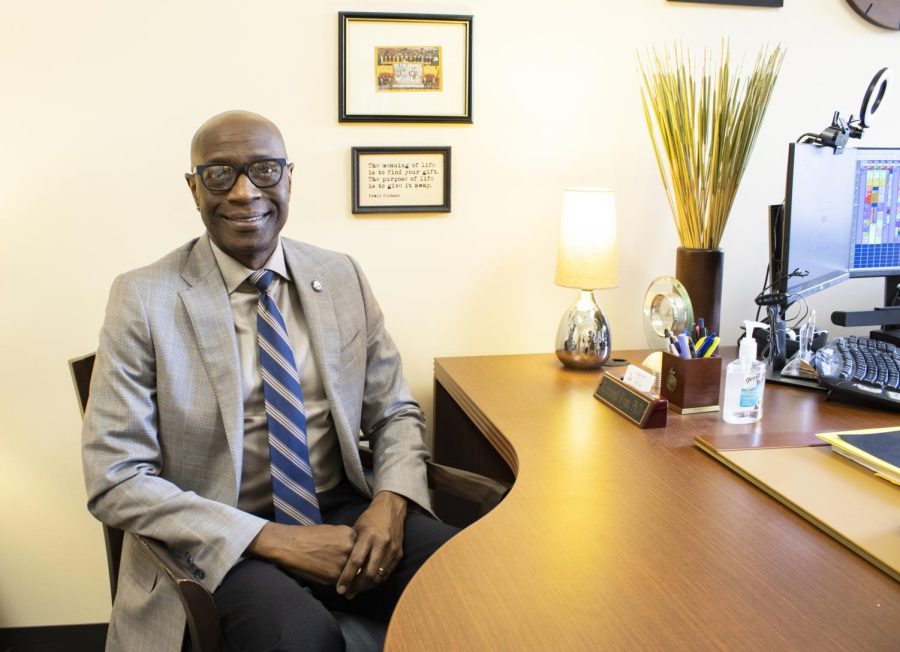 Dr. Richmond Wynn sits in front of his desk in the Counseling Center.

It was a beautiful day, and Dr. Richmond Wynn took full advantage. Lamps scattered around the room gave off a soft orange glow as sunlight chased shadows from dark corners. Neatly organized papers sat out on a wooden desk, awaiting his attention. Settling back in cushioned chairs just over six feet apart in a room reminiscent of home, we began our conversation.

“Knowledge is better than riches” read a piece of artwork on the wall; although that doesn’t mean riches are off the table, Wynn said with a chuckle. “I love that message.”

We met in his office on the second floor of Founders Hall. The newly appointed University of North Florida vice president and chief diversity officer, Wynn had yet to move into a new space just one building over in J.J. Daniel Hall. He wore a neatly buttoned-up suit, professional but not stiflingly so, and looked out at me from behind polished disc-shaped glasses.

Born in Cocoa Beach, Florida — a small little bedroom community east of Orlando — Wynn was raised in a very religious Judeo-Christian environment. “My father grew up in Cocoa and he is one of 18 children, my mother is one of 12 so we had a humongous family,” he reminisced.

Attending predominantly white schools, Wynn was sometimes only one of a couple of black students in a class. An unconfident but curious child, he was always asking why. “I wasn’t being rude, I was just trying to piece it together.” Later, he graduated from the University of Florida and loved the traditional college experience. Now an academic, this curiosity has served him well.

He graduated from the University of Florida and later moved to Jacksonville. “Divine intervention” is what Wynn said kept him in Jacksonville over the years. “I’m like, ‘this is crazy!’ Every time I get close to leaving, something good happens.” Be it a promotion, a job interview or a relocation to a bigger and nicer office, those good things have kept him tied to the city.

Applying for a counseling job in 2000, Wynn’s director arranged for some staff to become adjunct faculty. That’s when “I fell in love with teaching,” Wynn told me. “It’s like I’m facilitating a group process […] The energy was a little different than having a group in the Counseling Center.”

And that was only the beginning. Wynn began to teach an undergraduate public health course and eventually decided he aspired to teach counseling. However, that came with additional requirements. “ It’s like ‘you have to get a doctoral degree,” he laughed. “And I’m like ‘O.K., well what’s the dissertation and how do you do that?’”

On Aug. 8, 2010, coincidentally his birthday, Wynn graduated from UF with a doctoral degree in counselor education and supervision with an emphasis on teaching and research.

Later on, Wynn became a full-time tenure-earning faculty member at UNF, next to the director of that program and then the Counseling Center director in 2019. “I haven’t left yet,” he joked about Jacksonville, “I mean, I’ve left, I’ve been around, but I haven’t left campus.”

Marking his 24th anniversary at UNF, alongside the university’s 50th, Wynn believes there is more work to be done for diversity on campus.

“I like the acronym DEI or DIB — diversity, equity, inclusion and belonging — and I like that because they all really go together,” he said. “Diversity, in and of itself, is really looking at representation in any space.”

Looking at the UNF student population of 17,043, white students make up the majority at 62.11%, according to the Office of Diversity and Inclusion. Wynn says the goal is to look at the Greater Jacksonville community and “reflect” its census data back onto UNF to see how they stack up against one another.

“One of the things we want to do is to compare and look at who makes up Jacksonville and are we mirroring that?“ a question he didn’t shy away from answering. “And we’re not.”

Of course, his goals extend far beyond just diversity and also aim at inclusion and belonging. Expressing his gratitude for the position created under Szymanski’s administration, Wynn wants to push it forward even further using tools he developed as the Counseling Center director. Wynn lays heavy emphasis on the interplay between mental and physical health.

Where some have separated the two, Wynn said, “You can’t have one without the other, they work together.” Many of the misconceptions regarding mental health are automatically labeled as a disorder, disease or problem that needs an immediate remedy, he said.

While this may be true in some cases, the Counseling Center also works to “engage in prevention and early prevention,” meaning before there’s a problem or when there is no problem, Wynn explained. “All of us should be, hopefully, invested in our personal growth and development,” a concept he developed at the Counseling Center but applies outward.

“I see you” is one of Wynn’s favorite mottos. The overarching message? There is enough space on Earth for every single incredibly complex person at the end of the day.

“That’s part of my mission to work on creating an environment where we all have that mentality that there’s plenty to go around, and that you’re welcome here, there’s space for you and there’s space for you to be your unique self,” Wynn told me with a twinkle in his eyes. “Don’t try to be me, be you.”

When asked whether diversity includes people like Sister Cindy, Wynn thinks not. Devaluing certain groups of people in our society, namely the LGBTQ community, Sister Cindy publicizes “very biased and very dangerous thinking,” according to him.

“That to me is not an example of diversity of thought because she’s starting out from a place of devaluing a group of people simply because of how we identify.”

“I want [UNF] to be where you walk by somebody and they’re so very different from you and instead of being afraid, or resorting to stereotypes about that person or those people, you are intrigued and excited that somebody so very different from you is right next to you here on this campus, and they are just as welcome as you are in anybody else,” Wynn said with a passionate smile. “I want people to be intrigued and curious about others and so curious that they want to make sure they feel welcome because they want to get to know them.”

Speaking about his new role, Wynn called it his opportunity to “put my money where my mouth is.” The job gives him the chance to participate in conversations and decision-making at the cabinet-level. Simultaneously, Wynn has always talked about counselors being more welcoming or being conceptualized from a “culture-centered place,” making this the perfect time to practice just that.