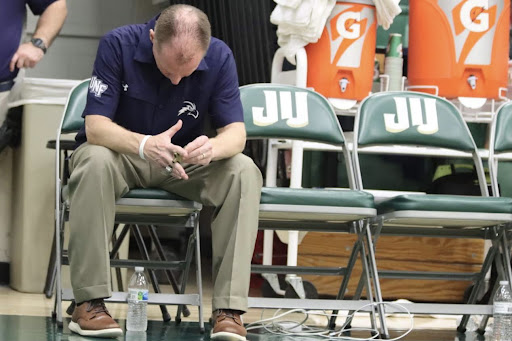 After steadily building momentum over the last few weeks, all hope seems lost as the Ospreys were trampled 71-39 by Jacksonville University (JU)  on Wednesday.

This game was over the second it started. Just four minutes into the contest, the Ospreys found themselves staring into a 12-0 hole. Nothing went right.

It appeared that the Birds of Trey had their wings surgically removed, shooting an abhorrent 1-21 from three-point range on Wednesday. Having off nights from deep isn’t inherently a death sentence, but when the team is shooting 27 percent overall, it’s going to be a long night.

The JU Dolphins were simply too big of a task for the Ospreys to handle, nonetheless contain. JU dominated the rebound battle, grabbing 40 boards throughout the game. In the times that their shots weren’t falling, which were few and far between, the Dolphins were able to secure rebounds to give themselves second chances to score.

While things were abysmal on the court, the story could be told through the demeanor of UNF Head Coach Matthew Driscoll going into halftime. For a few minutes after the first half ended, Driscoll remained on the bench looking down, with his face in his hands at one point. This sense of frustration and even hopelessness pervaded during the opening minutes of the second half, as the Dolphins continued to pull away.

This isn’t the 1960s, 39 points is not going to win a Division I basketball game. This score, as bad as it is, is actually a bit misleading in favor of UNF. The Ospreys didn’t crack the 30-point mark until there were just under six minutes remaining in the game, with some garbage-time free throws making things look slightly better.

After such a rough loss, one has to ask, “What’s next?” Winning five of the last six games helped sweep the otherwise dismal season under the rug, but Wednesday’s beatdown brought those issues back into the light. Being held to 39 points in a 32-point loss to your arch rival is unacceptable, no matter the circumstances.

The final game of the regular season, a road match with Stetson, takes place on Saturday. Leading scorers Jose Placer and Carter Hendricksen are yet to return from injuries, but working them back into the rotation after such a long break is no guaranteed solution.

Despite the outcome, Coach Driscoll remained calm postgame and looks forward to bouncing back.

“We’ve got to regroup, can’t let one lead to two,” Driscoll said. “We have to make sure that we wash this out quickly and then we move forward.”

In a game as catastrophic as this one, it’s hard to find any positives. However, one upside was the turnout of UNF fans. Across town, JU’s Swisher Gymnasium was filled to its capacity of 1,452. An entire section of the venue was dedicated to visitors from UNF.

This section, mainly composed of UNF students, brought some noise in favor of the Ospreys. The school spirit even continued into the second half, as UNF clung onto dear life on the court. It was a lively environment, with JU and UNF student sections both cheering on their teams.

Another interesting note was the attendance of some Jacksonville Jaguars stars, including wide receiver Laviska Shenault Jr. and linebacker Shaqem Griffin. It’s safe to say that the Ospreys didn’t make a great first impression on their NFL counterparts, though.

Wednesday’s loss, combined with a win by Kennesaw State, makes it unlikely that UNF will clinch a home game for the ASUN tournament. Barring a road trip to DeLand for Saturday’s matchup with Stetson, Osprey fans likely saw their team for the last time this season in person, which will undoubtedly leave a bitter taste in their mouths.