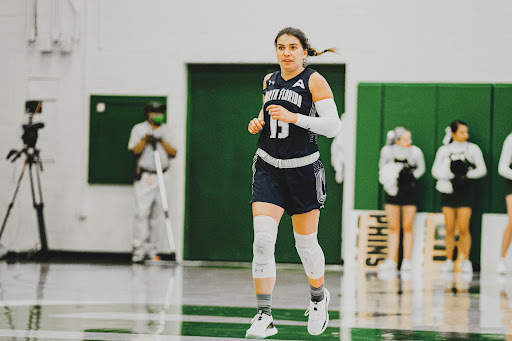 UNF women’s basketball got the job done on Thursday, picking up their biggest win against Jacksonville University in program history.

It has been an up-and-down season for the Ospreys, but a win over a rival might be just what the doctor ordered. The squad had lost their previous three games going into Thursday’s match, with two of these coming against the ASUN Conference’s top two teams: Liberty and Florida Gulf Coast.

UNF had control of this duel from the very beginning. After taking the lead two minutes into the game, the Ospreys never looked bad, leading the rest of the way. Hitting five of seven attempts from three-point range in the first quarter helped UNF secure control of the game early on.

The threes are falling tonight!

While the deep shots wouldn’t continue to fall at this rate, it was still a source of success for the squad in a game where they converted on half of their three-point attempts. UNF continued to dominate throughout the rest of the opening half, taking a 43-27 lead into halftime.

The Ospreys didn’t let off the gas after the break, though, outscoring the JU Dolphins in the third quarter. The fourth quarter was the only in which the Dolphins outscored the Ospreys, but it was far too late, with the Ospreys cruising to a 72-54 win.

While it was a nice day for the Ospreys on the offensive end, their defense also stood out. The Dolphins only converted 31 percent of their shots, hitting a meager five three-pointers in comparison to UNF’s 12.

“Ultimately, I think the difference in the game was how we defended,” Gibbs said. “[It’s] a good win for us and hopefully gives us momentum going into our last regular-season game.”

Now, the Ospreys sit at 12-15 overall and 5-10 in conference play. Their last game of the regular season takes place on Saturday at Stetson University. This will be a tough task, as the Stetson Hatters are 17-11 on the season. The game begins at 4 p.m. and can be streamed on ESPN+.