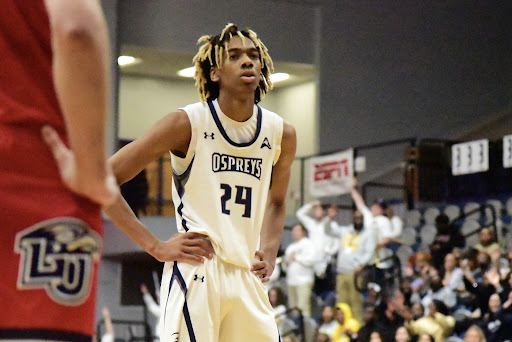 UNF forward Jonathan Aybar (21) and teammates regroup after a hard-fought possession on defense against Liberty University on Feb. 15, 2022.

NASHVILLE, Tenn. – A long and disappointing 2021-22 season came to a close on Tuesday as the Ospreys fell to Lipscomb University in the ASUN tournament.

In a season full of frustration, things started to look up towards the end of conference play. Barring a beatdown loss to Jacksonville University, it appeared as though the Ospreys were playing their best basketball of the year.

So much for that.

After a promising first half, with the score locked up at 31-31, it was clear that the game would likely come down to the wire. A large part of UNF’s early success was the play of forward Jadyn Parker, who scored the team’s first nine points. In a season full of negatives, Parker’s development as both a scoring threat inside and a defensive presence is undoubtedly one of the best takeaways from the season.

The source of last night’s struggles came primarily from one place: the paint. With this area of the court being so close to the basket, it makes sense that it would be a great place to attack. Lipscomb did just that on Tuesday.

The Bisons of Lipscomb went to work down low, outscoring UNF 46-26 in the paint. The Ospreys simply had no answer for Lipscomb forward Ahsan Abdullah, who torched UNF for 28 points, including 12 rebounds and six assists.

When a team is struggling to defend its own basket, like UNF was, shots have to be falling on the other end. This wasn’t the case, though. While free throw shooting was consistent, the Ospreys only hit 10 shots from the field during the second half.

This wasn’t enough to successfully counter Lipscomb, but things were still competitive to the bitter end. The Ospreys got the deficit down to just five points with less than four minutes remaining, but the Bisons came up with some key stops to secure a 74-65 win.

With Tuesday’s loss, the Ospreys end the season with a record of 11-20. With so many close losses, though, this statistic could be considered misleading. Nevertheless, a loss is a loss at the end of the day.

This is also the second straight season that UNF has been eliminated in the first round of the ASUN tournament. One has to think that, as the team ages, things can only go up from here.