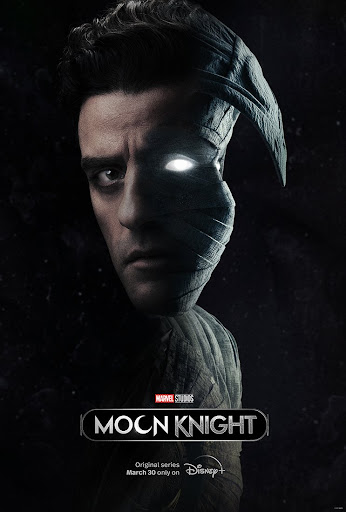 Marvel Studios has ventured outside of its usual formula at numerous points in recent years. Sometimes this results in unforgettable experiences, while other times, we get “Eternals.” Regardless of how you view them, it is interesting to see them tackle unknown properties and utilize their strange, if not outright bizarre, elements to draw people to them. That is very much the case with their latest series, “Moon Knight.”

The episode “The Goldfish Problem” revolves around a man supposedly named “Steven Grant” (Oscar Isaac), a worker at a London museum who has trouble keeping his dissociative identity disorder in check. This seems to be the case as Grant suffers from random blackouts where he finds himself in different locations without recollection of how he got there. This causes him to end up in confusing and deadly situations where a voice in his head, Khonshu (F. Murray Abraham), constantly instructs him what to do. Grant’s situation worsens when he finds himself entangled in a cult led by Arthur Marrow (Ethan Hawke), who seeks to hunt down Grant despite the latter having no idea what is happening. This eventually results in Grant discovering his alternate personality, which allows him to transform into Moon Knight so he can battle these new threats.

As someone who reads Marvel Comics, Moon Knight was always one of those characters who I’ve mainly seen in character crossovers or major event stories. With that said, some elements made him stand out. He had a cool look, a distinct personality, and a concept that I can easily see people getting invested in, which is a supernatural superhero with multiple identities inside him. This made him an intriguing concept compared to Marvel’s other characters. When it was announced he was getting his own series, it led to a small but still sizable interest in people who were curious about this character.

Now that the first episode is out I can safely say that this was a fantastic intro to this character. Oscar Isaac’s performance is a major standout as he really sells this character who is undergoing these bizarre circumstances. While there isn’t any Moon Knight action until the last 30 seconds of the episode, I feel Isaac more than makes up for it with likable and relatable charm.

This episode cleverly has you experience events from Grant’s point of view as he experiences these bizarre scenarios. This is effective as when you see him end up in random places after a blackout; you question whether or not he is experiencing it or is just dreaming. You see how this mentally as well as socially affects the main character. He often loses track of time, fails to make commitments, and comes across clues that make him question if he is his true self or not. This allows the creator to play with the audience’s expectations, since this is dealing with a character who has trouble distinguishing between fantasy and reality. Truth be told, this is one of the few pilots where I did not know what was going to happen next. With the other Marvel shows, I can get a good idea of what the series is going to go. But here, I legitimately questioned what this character was going to do. Why does he have multiple personalities? What is that weird Egyptian ghost that keeps following him? How does he end up in random locations?  This series is definitely aware of the unpredictability of its premise and it takes full advantage of it.

Another aspect that was brought up before this series premiere was that it was going to be more violent than any of Marvel’s other Disney Plus shows. I knew it wasn’t going for a hard R rating, but I was interested in them taking a step beyond what they usually do. With that said, the action in this episode is played as per the usual Marvel level, just with more hints of blood here and there. But what sets it apart is the character’s aforementioned personality disorder and how it affects him during these situations. For example, one moment Grant finds himself being held down by numerous cultists ready to take him down, only for him to briefly blackout and find his assailants beaten and bloody on the ground. There’s another scene involving a car chase where they chase him down a mountain side, and he blackouts to find himself driving backwards in a cupcake truck surrounded by bodies with a gun in his hand. It is so bizarre that I can’t help but love it. The best way I can describe these scenes is if you took the mind aspects of “Fight Club” and infused them with “Jason Bourne” (minus the sloppy cinematography).

All the elements pertaining to the characters personality disorder are great, but this show does have numerous supernatural aspects that have yet to be explained. For one you have this Egyptian entity that constantly bosses and insults Grant around whenever he is in danger. To most people this can feel very “Venom-like” in those movies. But I feel this stands apart because it does play with the fact that it does revolve around multiple identities. It also feels more “toxic” and does play into the character’s violent nature, which is something I want to see in a character like this.

The effects here are solid for the most part. For one, Moon Knight’s transformation was cool. I especially love the detail of how the cloth of his suit materializes onto him almost like a mummy. But you also have some of the usual effects that you would associate with supernatural stories. For example, there are scenes where Khonshu can look cartoony at times, particularly during a scene where he chases Grant onto an elevator. You also have these Egyptian dog creatures near the end that have a similar feel. Though they aren’t distracting since they do have a nightmarish/horror feel to them which you can argue is their intention.

Overall, the first episode of Moon Knight was a unique introduction to one of Marvel’s most exotic characters. I for one would love to see where they go with future seasons, or even feature films. Go grab your goldfish and see for yourself.

Spinnaker rates this episode 5 out of 5 Spinnaker Sails.