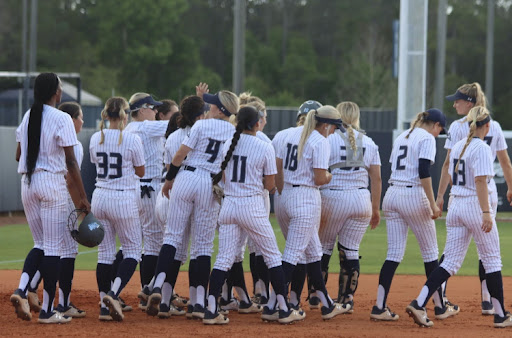 It was an all-around team effort over the weekend for UNF, with pitching and batting contributing to the team’s third consecutive sweep of a conference opponent.

The Ospreys softball team continued their successful 2022 campaign over the weekend, taking all three games from the Kennesaw State Owls.

With only a few more weeks left in the regular season, every game matters in terms of securing the best possible seed for the conference tournament. What’s one way to ensure good positioning for this? Series sweeps.

The University of North Florida (UNF) Ospreys did just that last week against arch rival Jacksonville University, following up a sweep of Central Arkansas the week prior. Sweeping three consecutive conference opponents isn’t likely, but the Birds of Clay did just that.

The series got started on Friday afternoon with a doubleheader. Pitching has been an area of strength for the squad this season, something that remained true in Friday’s opener.

Two runners in scoring position is no problem for @halle_arends!

Halle Arends was on pitching duty in the first game, tossing four scoreless innings before finally giving up a run in the fifth inning. By this point, though, it was far from detrimental. The Ospreys had scored three runs early in the first inning, giving Arends a comfortable buffer to work with.

Morgan Clausen was called on in relief of Arends, closing out the game with two-plus innings of scoreless work. The Ospreys added an insurance run in the bottom of the fifth and would go on to win by a score of 4-1.

While UNF had experienced a fairly smooth win in the series opener, the back end of Friday’s doubleheader would be anything but. Both offenses got to work early, scoring a combined five runs in the first inning.

Kennesaw State was hanging around, trailing 5-3 through five innings, but the damage was yet to come. The Ospreys led 7-3 going into the top of the seventh inning. The Owls would have to score four runs in one inning just to keep their hopes alive.

The Owls defied the odds and went off for a four-run frame, tying things up and sending the game into extra innings. UNF may have let the lead dissipate, but they weren’t going to let the win slip away. In her second walk-off hit this year, Hayley Bejarano knocked a single into right field, scoring Savannah Channell to win the game 8-7.

Despite the high-pressure situation, Bejarano had a very calm and methodical approach to the at-bat.

“I just wanted to keep it simple,” Bejarano said. “They have really good pitching, so I didn’t want to try to overswing and just tried to take it base hit by base hit.”

Just like that, UNF was one win away from picking up their third sweep in a row against ASUN competition. Right out of the gate, it looked like this would soon become a reality thanks to four first-inning runs scored by the Ospreys on Saturday.

Star pitcher Halle Arends was back at it, tossing another gem in the final game of the series. The junior went six innings, allowing just one run during her time in the circle. Morgan Clausen took over from there on out, picking up her sixth save of the season.

A 5-2 win for UNF wrapped up their third straight conference series sweep. This was also the ninth win in UNF’s last 10 contests. The Ospreys will take a quick break from ASUN play, hitting the road to take on Georgia Southern on Wednesday. Following this, things pick right back up with a road series against Stetson.

This UNF team is poised to make a deep run in the ASUN tournament. Before that can happen, though, they must continue their winning ways and finish the regular season strong.