Learning from art with “The Goldfinch” 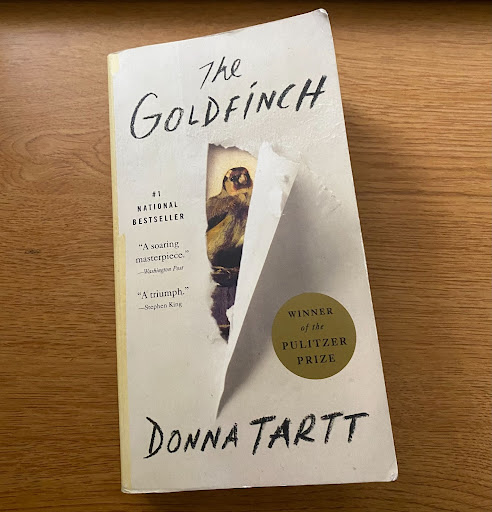 “The Goldfinch” by Donna Tartt. Photo by Julia Croston.

“The Goldfinch” by Donna Tartt, published in 2013, follows the life of a character named Theo as he comes to age after surviving a traumatic event. Reading the novel feels like analyzing a complex painting and slowly looking at all of the details.

The story begins with Theo going to an art museum with his mother. Before they leave, an explosion destroys the museum, and Theo grabs “The Goldfinch,” a painting of a small bird. The painting remains a focal point and connecting piece as Theo changes over time.
“Whatever teaches us to talk to ourselves is important: whatever teaches us to sing ourselves out of despair. But the painting has also taught me that we can speak to each other across time.” —Donna Tartt, “The Goldfinch”
The novel does not really have a great significant moral or purpose aside from just creating a space for the reader’s mind to live inside. This has a similar effect to watching a coming of age or plotless movie. Things do happen in the novel, but it does not contribute to a conventional plot structure, which is more reflective of reality. However, this can lose appeal from some readers due to the novel’s length.

One deception of the novel is the assumption that the incident at the museum would play a major role in Theo’s search for what happened. Subverting this trope, the novel does not harbor a major secret to be revealed. Theo finds out it was an act of terrorism and purely coincidental in his timing at the museum. Tartt uses this to demonstrate the reality of tragedy, often occurring without closure. This argument continues throughout the novel as more tragedy takes place.

The length of the novel may seem concerning to some; however, the writing makes it worthwhile. Tartt builds a story that captivates and demands attention, generating specific feelings. While this is a more realistic form of fiction, Tartt still builds a world defined by Theo’s mind as an attached, psychological approach to storytelling. The language used becomes something consistent and steady with a plot that constantly shifts in direction.

None of the characters are completely likable, but this may be intentional. Towards the end, Theo talks about the good and bad in people and how there is no definitive answer. The characterization of Theo reflects the complexity of real people as opposed to the convention of a flawless main character.
“And in the midst of our dying, as we rise from the organic and sink back ignominiously into the organic, it is a glory and a privilege to love what Death doesn’t touch.” —Donna Tartt, “The Goldfinch”
One of the major themes deals with mortality and what defines individuals. At first, Theo feels important only because he has the painting and thinks his life has no significance without it. By the end of the novel, Theo realizes that his attachment to the painting allows him to appreciate art as a form of communication with the past to learn about life.

With Tartt’s writing style, the novel stretches and speeds up through time and specific moments. This can make the book seem boring at some points, but Tartt uses these moments to demonstrate that life is not always filled with significance and adventure.

The novel is not necessarily about telling a story but instead about what can be learned. Tartt generates an argument about what art teaches us and how it should hold a great significance in culture and the modern world. Not a monetary value, but instead art should have a sentimental and aesthetic value.
“She was the golden thread running through everything, a lens that magnified beauty so that the whole world stood transfigured in relation to her, and her alone.” —Donna Tartt, “The Goldfinch”

Spinnaker rates this book 4 out of 5 Spinnaker Sails.