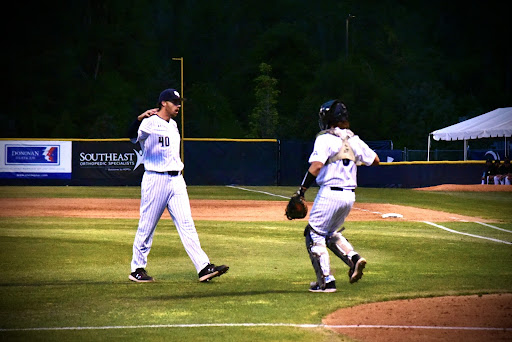 Peter Holden was full of passion after securing the win with a strikeout in the ninth inning.

Pitching was the name of the game on Friday as the University of North Florida (UNF) took down Kennesaw State (KSU) 3-0 in the series opener.

A pitcher lasting all nine innings is a rarity in college baseball. To do this while only giving up two hits, though, is even more impressive. Peter Holden carved his way through the KSU lineup in a game that took less than two hours to complete.

It was a beautiful afternoon on the campus of UNF, which was bustling with the North Florida Invitational also taking place a few hundred feet away at Hodges Stadium. The wind blew strongly, affecting some fly balls early on in the game.

The Ospreys struck first, as Dallen Leach snuck a single into left field during the second inning. This brought in Cade Westbrook to score, giving UNF an early 1-0 lead. As the game carried on, it appeared as though this might be all that was needed to secure a win.

The innings passed as time flew by. Both pitchers, including KSU’s Jack Myers, were giving stellar performances on the mound. Hits just weren’t coming, so the opposing squads had to make the most of any opportunity they got.

While it was mostly smooth sailing for Holden, things began to get dicey in the seventh inning. With two runners on for KSU, a diving catch by UNF outfielder Brock Edge quite possibly saved the game. Avoiding disaster, the Ospreys finished off the inning with the shutout intact.

The top of the eighth inning came and went. Holden was still going strong, but the offense provided some insurance in the bottom half of the frame. A wild throw gave the Ospreys a baserunner, something that was a hot commodity all evening.

The throwing error proved costly, as Isaiah Byars took a hanging pitch down the middle deep to left field to extend the lead to 3-0. Holden returned for the ninth inning, quickly recording two outs.

Things looked like they may get hairy, as Holden fell behind in a count, eventually walking the KSU batter. With someone on base, the Owls finally had a glimmer of hope.

Behind encouraging cheers from the UNF dugout, Holden got right back to his dominant ways. He struck out the next batter he faced to end the game, giving the Ospreys a 3-0 win to get things started.

Not only was Holden’s performance critical in getting a win on Friday, but it also helped keep the UNF bullpen fresh for the rest of the series. With two more games this weekend, rested arms will likely prove key in picking up a series win.

Following the game, Holden was more excited about the effect his performance had on the team overall, rather than basking in the glory himself.

“To get a win like this when we really needed it feels amazing,” Holden said.

The pitcher also credited the help he had behind him on the diamond in the winning effort.

“Great defense behind me; can’t thank them enough,” Holden added. “They gave me three runs and just got the job done.”

The Ospreys still have work ahead of them, though. They face the Owls twice more this weekend, with matchups remaining on Saturday and Sunday. Following this, they face a difficult non-conference opponent in the UCF Knights at home on Tuesday.

The season hasn’t exactly gone how UNF would like, but they’re starting to click at just the right time. When this team is playing to its fullest potential, they could be a serious threat in the ASUN tournament.