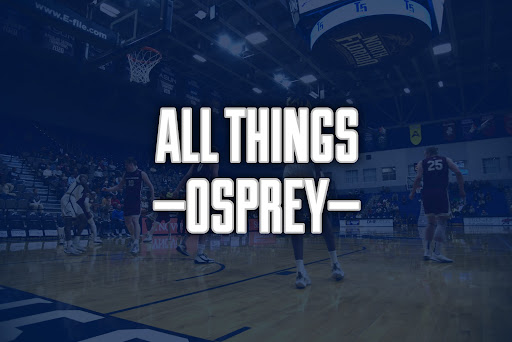 An Olympic champion swinging by campus is far from ordinary, but Andre De Grasse did just that over the weekend, competing in the North Florida Invitational.

The University of North Florida (UNF) hosted the North Florida Invitational at Hodges Stadium on Saturday and Sunday. The event consisted of athletes from multiple major-conference institutions and national teams alike.

The headliner of the field was by far Andre De Grasse, a six-time Olympic medalist from Canada. De Grasse competed in the men’s 200 meter event, just beating fellow Tumbleweed Track Club teammate Trayvon Bromwell by two one-hundredths of a second to finish in first place.

While Olympians rightfully take the spotlight, the Ospreys made sure to make an impact of their own at the meet. Timothy Doyle and Robert Pedroza made UNF proud, taking two spots on the podium in the men’s 1500 meter event. Sam Field of Florida State University (FSU) narrowly won the competition by a slim margin of under two tenths of a second.

An international track meet may have been the weekend’s biggest event at UNF, but it was far from the only one.

UNF baseball took to the diamond for a weekend series against the Kennesaw State (KSU) Owls, coming out with two wins. Though, the crown jewel of these was easily Friday night.

In a game that took less than two hours to complete, UNF pitcher Peter Holden mowed through the Owls lineup en route to a nine-inning shutout. With only three outs coming from strikeouts, the Osprey defense came up big multiple times throughout the evening.

UNF held a 1-0 lead for most of the game, but Holden was given a bit of a cushion when Isaiah Byars launched a two-run home run in the eighth inning to increase the UNF lead to 3-0. Strikeouts weren’t a key component of the night, but it’s how it ended, with Holden fanning the last KSU batter to complete the shutout and grab the win.

Saturday didn’t go UNF’s way, but the Ospreys bounced back with a strong 7-0 win on Sunday. UNF jumped out to an early lead and never looked back. Unlike Friday, though, a dual effort on the mound from Max McKinley and Dominick Madonna helped seal the deal to pick up the series win.

Softball was also in action, but didn’t quite have the same luck. Any date with the Liberty Flames is never an easy task, no matter the sport. This was proven once again on Saturday and Sunday as the Ospreys were swept by the Flames, who secured the ASUN East Division championship in the process.

This closes out the regular season for the softball squad, but there is more yet to come. The Ospreys will be hosting the ASUN tournament, taking place at the UNF Softball Complex from May 10 through May 14.

The spring sports seasons are wrapping up, so make sure to swing by a game and see the Ospreys before it’s too late! Stay tuned with Spinnaker and  All Things Osprey for the latest on UNF athletics.