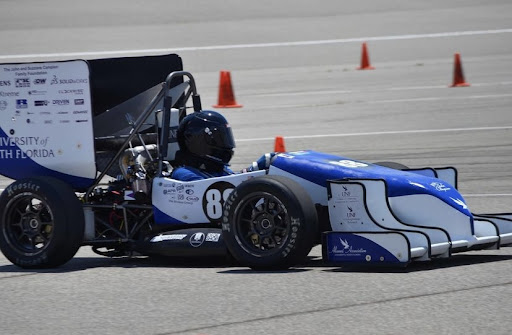 Since the competition last year, the University of North Florida Osprey Racing Club has been preparing for the Formula SAE (Society of Automotive Engineers) Collegiate Design Series held at the Michigan International Speedway, starting on May 18.

“Every year, we design and build a single-seat racecar to compete with schools around the world in a competition,” Team Captain Nathan Stratton explained.

Stratton, a mechanical engineering major, described the year-long planning process the team has gone through in preparation for this year’s competition. Since the club is student-led, the members have to finish both finals and their car within the same span of time.

“We are currently balancing getting things finished and balancing our finals. So, the weekend between finals and when we leave is going to be really busy for us. That’s probably going to be the busiest week all year,” he said.

The four-day competition hosts 120 teams from all over the world, including teams from Germany and Austria. Each team will compete in three static and four dynamic events. 16 members from UNF will travel and stay until the event ends on May 23.

The static events happen before the competition starts in Michigan. These events held online, include a business presentation, an evaluation of the engineering design and a cost analysis of the team’s budget. This year, they have a business team, despite being primarily an engineering club. Because of these events, Stratton said the team can be inclusive to more students with different areas of study, with a focus on business and budget for these events.

“We do have lots of members that aren’t engineers as well, and that’s one of the larger areas we’ve grown in this year actually,” he said.

Dynamic events include acceleration, skidpad, autocross, and endurance/fuel economy. Acceleration is a straight 75-meter drive that tests the car’s ability to gain speed. Skidpad has the driver go around a figure 8 track to test turning ability. With two attempts, autocross evaluates the car’s speed in one lap. The final event, endurance/fuel economy, is an 11 to 12-minute drive, alternating between two drivers, to test the car in its entirety as well as its fuel consumption.

Last year, Stratton shared, the team finished around 30th in the nation; their best performance. The car built by the team was their ninth ever, and they still use it for events, including a recent team driving day to let all members have a turn behind the wheel. Stratton hopes to at least match last year’s result.

“The goal this year is to be the best team in Florida,” Stratton shared.

Another goal for this year, the team wants to learn from last year and improve in any way they can. “If we can dial in a couple things and fix a couple of things that I think so far we have this year, we’re going to have a really, really good year,” Stratton said hopefully.

Because of competition rules, the team had to build a new frame. They started working on the new car as soon as the competition last year ended and wanted to build a completely new design. Cars from past competitions can be viewed here. This year’s car will be unveiled to the public right before the team leaves for the competition.

“The car this year is supposed to be lighter and just a more optimized version of what we had last year,” he clarified.

Stratton appreciates Dr. Nuszkowski’s guidance because he lets the team make mistakes as an opportunity to work out the problems for themselves and always gives good advice when asked.

“I’m pretty excited to see where they are. There’s a little bit of luck involved where you don’t know if something is randomly going to fail this time,” Dr. Nuszkowski said. “I think we have a really, really good team this year.”

According to Dr. Nuszkowski, funding is always a challenge because it is “not an inexpensive club.” UNF’s 50-hour giving challenge raised $1.75k for Osprey Racing, according to their Instagram.

Requesting $21,822.38 in total, Osprey Racing presented to Student Government (SG) on October 22, 2021. Without funding, the team explained they would not be able to compete in Michigan. At first, SG members were concerned about the price, but they ultimately agreed funding would be good for the UNF community. SG passed the bill, which helped pay for operating the club for a year and building the new frame. Last Senate meeting, on April 15, Stratton updated SG on what they have accomplished with the funding, displaying photos of the new frame and parts.

While the monetary demands of the club may seem too expensive, Stratton and Dr. Nuszkowski both expressed it is a worthwhile investment, because the club plays a significant role at UNF as a way for students to work together and apply what they learn in the classroom.

The project gives the students an opportunity to work on something for a long period of time as opposed to a shorter school project. While classes focus on different areas of engineering, Osprey Racing allows the students to connect everything they have learned. “There isn’t a classroom that talks about what they are doing,” Dr. Nuszkowski explained.

The cars also function as a marketing tool for UNF and sponsors. Stratton believes the car and performance in the competition help showcase UNF to prospective students and employers to gain more attention for the university. “Racecars are just giant advertisements for things that go fast and make fun noises,” he said.

Because of their competition performance, engineering employers will come to UNF career fairs and recruit UNF students, giving team members an opportunity to show off their skills and network. “Employers look at how schools perform in design competitions,” Stratton clarified.

Stratton explained that last year’s team captain currently has an internship at Tesla in California, being recruited because of the competition.

After all of their hard work, the team is hopeful for the competition this year. Regardless of the outcome, Dr. Nuszkowski believes “experience is the most valuable thing they are getting.”