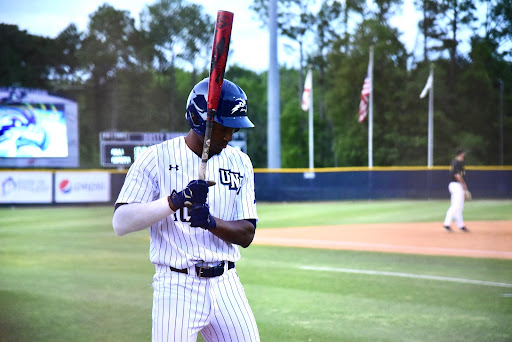 The Ospreys went into Tuesday’s matchup against the University of Central Florida (UCF) with the season series on the line, but weren’t able to secure the win despite an eighth inning rally.

Fans filled the stands of Harmon Stadium at the University of North Florida (UNF) on $1 hot dog night, getting their money’s worth with dinner and a show. This show didn’t materialize until late in the game, though, as the Ospreys were shut down for much of the early parts.

Redshirt sophomore Cameron Crain took to the mound for the UCF Knights, lasting a strong four innings while giving up no hits and picking up five strikeouts. In the meantime, his offense got to work, providing run support that would prove crucial later on.

Across the aisle, the opening frames of Tuesday’s affair weren’t as pleasant for UNF starting pitcher Tony Roca. A long battle with UCF first baseman Ben McCabe ended on a sour note, with a pitch being taken deep to center field to give the Knights an early 1-0 lead. Roca bounced back, though, finishing the inning with three strikeouts.

Tommy J! 💣@tomjosten crushed a first pitch two-run bomb to the right and we extend the lead!

The third inning came and went without incident, but this wasn’t the case in the fourth. UCF second baseman Tom Josten got a hold of one to give the Knights their second home run; this time, a two-run shot. Now trailing 3-0, the UNF offense still struggled to get anything going.

While the UNF bats lagged, the Knights thrived. UCF’s sluggers exploded for a four-run effort in the fifth and sixth innings, widening the gap to 7-1 in the Knights’ favor. The Ospreys may have gotten on the board with a grounder courtesy of left fielder Justin Holmes, but they were left staring at a six-run deficit with just three innings remaining.

The seventh inning passed quietly, but a storm was brewing in the third-base dugout. As the Ospreys took to the batter’s box in the bottom of the eighth, things didn’t look great. This quickly changed, though, as pinch hitter Blake Pound was hit by a pitch. A baserunner was all the squad needed, as this served as the spark for what was to come.

Back-to-back singles by UNF infielders Isaiah Byars and Abraham Sequera loaded the bases with just one out. The opportunity UNF fans had been waiting for all night finally arrived. Sacrifice flyouts aren’t the most dramatic way to get runs on the board, but they are rather effective. UNF outfielder Cade Westbrook proved this with a flyout to left, scoring Blake Pound to make it 7-2.

Still trailing by five runs, the Ospreys weren’t finished. Trey Spratling-Williams was brought in to pinch hit and did nothing short of delivering. A liner up the middle brought in a run. The deficit was now down to four runs. Another single of similar fashion by catcher Dallen Leach brought in another run to make it 7-4. Justin Holmes was later hit by a pitch – just as the inning started with Blake Pound – to plate another runner. The deficit was now just two runs.

Batting around to where things got started, Blake Pound struck out and the inning ended. The Ospreys still trailed by two runs, but there was one more inning to get the job done. This challenge became tougher, though, as a RBI single by UCF shortstop Noah Orlando bumped the lead back to three runs.

The magic ran out in the ninth inning, as the Ospreys were sat down in order. UCF took the game 8-5 and came out on top in the season series, winning three of five matchups this year. A loss is nothing to celebrate, but UNF displayed incredible resilience and gave themselves a shot at the win.

The Ospreys will have a shot to bounce back with another in-state foe, the Stetson Hatters, coming to town this weekend. The regular season is quickly winding down, so the team will look to finish strong to put themselves in position for success in the postseason.