AP: Next battle over access to abortion will focus on pills 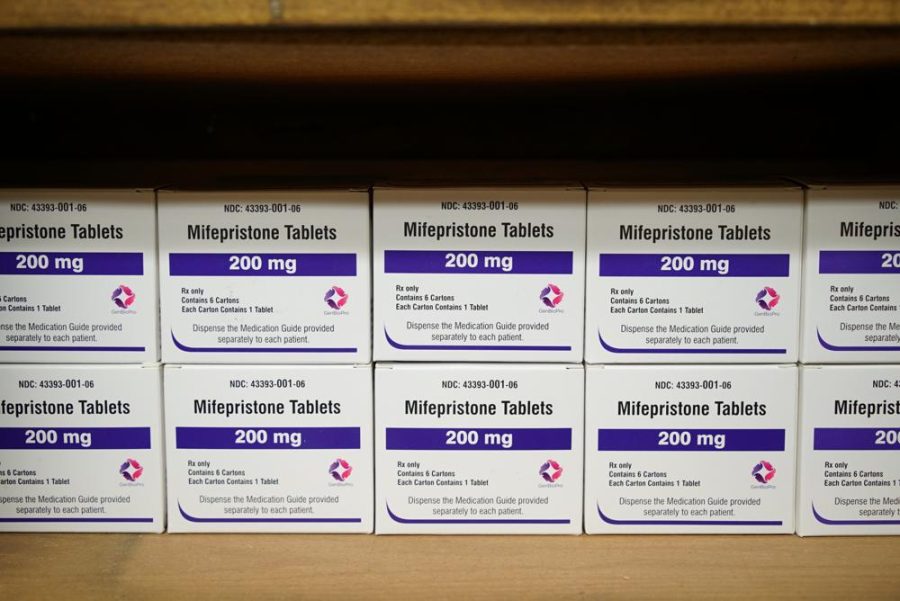 Boxes of the drug mifepristone line a shelf at the West Alabama Women's Center in Tuscaloosa, Ala., on Wednesday, March 16, 2022. The drug is one of two used together in "medication abortions." According to Planned Parenthood, mifepristone blocks progesterone, stopping a pregnancy from progressing. (AP Photo/Allen G. Breed)

For abortion-seekers like her, such journeys, along with pills sent through the mail, will grow in importance if the Supreme Court follows through with its leaked draft opinion that would overturn the landmark Roe v. Wade decision and allow individual states to ban the procedure. The woman, who spoke on the condition of anonymity because she was concerned for her family’s safety, said the abortion pills allowed her to end an unexpected and high-risk pregnancy and remain devoted to her two children.

But anti-abortion activists and politicians say those cross-border trips, remote doctors’ consultations and pill deliveries are what they will try to stop next.

“Medication abortion will be where access to abortion is decided,” said Mary Ziegler, a professor at Florida State University College of Law who specializes in reproductive rights. “That’s going to be the battleground that decides how enforceable abortion bans are.”

Use of abortion pills has been rising in the U.S. since 2000 when the Food and Drug Administration approved mifepristone — the main drug used in medication abortions. More than half of U.S. abortions are now done with pills, rather than surgery, according to the Guttmacher Institute, a research group that supports abortion rights.

Those moves have spurred online services that offer information on getting abortion pills and consultations to get a prescription. After the woman in South Dakota found that the state’s only abortion clinic could not schedule her in time for a medication abortion, she found an online service, called Just The Pill, that advised her to drive across to Minnesota for a phone consultation with a doctor. A week later, she came back to Minnesota for the pills.

She took the first one almost immediately in her car, then cried as she drove home.

“I felt like I lost a pregnancy,” she said. “I love my husband and I love my children and I knew exactly what I had to say goodbye to and that was a really horrible thing to have to do.”

South Dakota is among several states, including Texas, Kentucky, Arkansas, Ohio, Tennessee and Oklahoma, where Republicans have moved to restrict access to abortion pills in recent months. South Dakota Gov. Kristi Noem said additional, in-person visits for the pills and a ban on them being sent through the mail are needed to protect women and save “unborn children.” A total of 19 states require a medical clinician to be physically present when abortion pills are given to a patient.

Besides crossing state lines, women can also turn to internationally-based online pharmacies, said Greer Donley, a professor specializing in reproductive health care at the University of Pittsburgh Law School. Some women also are having prescribed pills forwarded through states without restrictions.

“It allows for someone to have an abortion without a direct role of a provider. It’s going to be much harder for states to control abortion access,” she said, adding, “The question is how is it going to be enforced?”

Sue Leibel, the state policy director for Susan B. Anthony List, a prominent organization opposed to abortion, acknowledged it’s an issue that “has crept up” on Republican state lawmakers.

“This is a new frontier and states are grappling with enforcement mechanisms,” she said, adding, “The advice that I always give — if you shut the front door, the pills are going to come in the back door.”

Leibel maintained women should not be prosecuted for seeking abortions, keeping with a long-standing principle of many abortion opponents. She suggested the next target for state enforcement should be the pharmacies, organizations and clinics that provide the abortion pills. She also said abortion-rights opponents should focus on electing a presidential candidate who would work to reverse the FDA’s decision.

The FDA said a scientific review supported broadening access to the drugs and found complications were rare. The agency has reported 26 deaths associated with the drug since 2000, though not all of those can be directly attributed to the medication due to existing health conditions and other factors.

However, with new legal battles on the horizon and abortion seekers going to greater lengths to obtain the procedure, Donley, the law school professor, worried that state lawmakers will turn their attention toward the women who get the pills.

Indeed, a Louisiana House committee advanced a bill Wednesday that would make abortion a crime of homicide for which a woman ending her pregnancy could be charged, along with anyone helping her.

“Many anti-abortion legislators might realize the only way to enforce these laws is to prosecute the pregnant person themselves,” Donley said.