What is “uniquely UNF?”: First half of final presidential interviews conclude 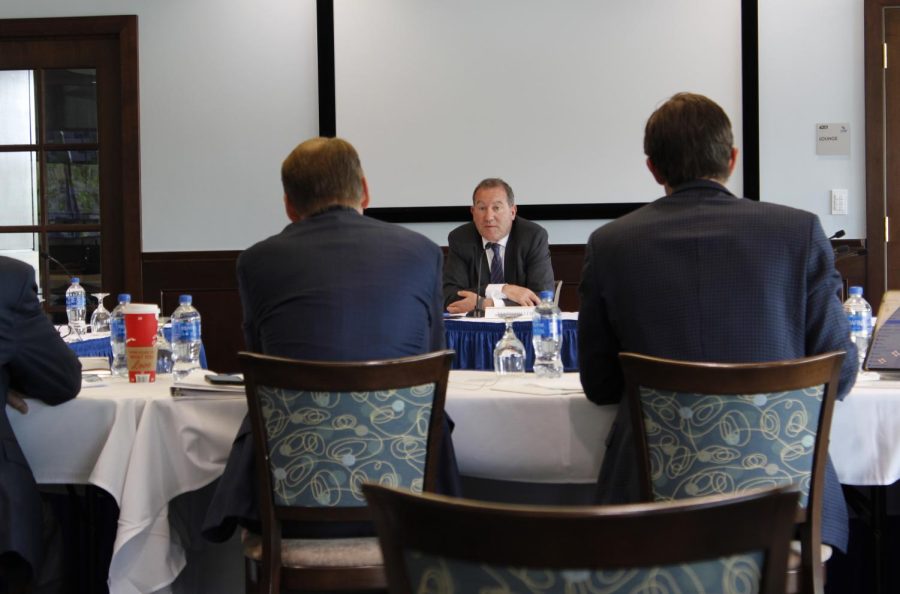 University of North Florida Board of Trustee members listen to Marc Miller as he answers a question during his final interview on Friday, May 13, 2022.

The sun rose over the University of North Florida Talon Room as the Board of Trustees (BOT) convened to conduct their final interviews of two candidates for the university’s seventh president Friday morning.

Four hours apart, Marc Miller and David Blackwell took their seats before a ring of trustees in separate interviews. Nine board members attended in person and one participated over Zoom due to health concerns.

The two-hour-long interviews were carved into three portions each and filled with note-taking, seemingly endless questions and time spent getting to know each candidate.
The ‘hot topics’
During his interview, Miller focused on a wide variety of essential topics, including finding long-term revenue sources, increasing community engagement within and outside the university, online education, and even the UNF coastal sciences program.

Blackwell discussed incorporating state-of-the-art technology, increasing the rate of college attendance, expanding UNF’s outreach in other locations besides Jacksonville and retaining a connection with students long after graduation.

During his initial hour, Miller addressed some of the broad challenges that universities, in his opinion, face. He believes that supporting the array of UNF students, faculty, and staff requires resources not found in state funds and tuition alone.

BOT member Christopher Lazzara articulated how the BOT “view [the UNF president] as the captain of the airplane.” The candidates reflected this energy as each took the reigns in their interviews by addressing specific topics and asking impactful questions.

Miller’s interview adopted a super interactive route, constantly engaging with the trustees. Blackwell took a different approach. During the first part of his interview, he gave a pre-prepared vision statement that outlined his initiatives for UNF in the current higher education environment. Later on, the trustees began to ask more specific questions.
Creating new revenue streams
A well-frequented point, both candidates discussed the need for another funding source to support the university better fiscally. Indeed, Miller said, there is a decline in the number of students wanting to and expected to attend college on the national level. He argued that UNF must find a new source to combat those expectations.

“The days when general funds were used to support the majority of higher education are gone,” he said. Miller explained that this support must come from beyond the funds driven by tuition and state funds, giving research funds as one example.

Both candidates devoted significant time to discussing the potential development of additional streams of revenue and the need for “aggressive branding,” as Blackwell called it.
Online opportunities
In a world still transitioning away from a society built around the COVID-19 pandemic, Miller and Blackwell see incredible potential in online learning. The ability of online courses to give students a “level of convenience” is remarkable and should be expanded, Blackwell said.

However, he did acknowledge that there should predominantly be in person, but there “should be some measure of flexibility.”

Posing a hypothetical question to the board, Miller asked if many professors were coming in and giving lectures to students in person.

“Why?” he said, “the world is moving in a different direction […] I just think there’s massive opportunity there.”
Longevity
Diving into what he called “lifelong learning,” getting in front of high schools is vital to Blackwell. By the time high schoolers get onto the UNF campus, he said, they should be “ready to roll.”

Transitioning instead toward those who have already graduated, he recommended that the board not wait 20 years before going and asking alumni for money.

Keep that connection “over their entire lives,” he said. Build programs around what alumni will need “before they know they need it.”

Of course, keeping the attention of students already attending UNF is equally important too, something both candidates had some ideas about. Comparing UNF to the University of Arizona, Miller explained how the entire community wears the university colors on game days—expanding the definition of community from just UNF to the whole of Jacksonville and beyond. Getting people entirely unrelated to UNF involved contributes to that engagement, he said.

Incorporating lifelong email—student email addresses that never expire—was proposed in both interviews and the candidates liked the idea.

What’s next?
Miller and Blackwell’s interviews complete just half the candidates the BOT will meet. The board will convene again to interview the last two candidates on Saturday. All meetings will be public and located in Building 16 on the fourth floor. See the full schedule below:

Stay with Spinnaker as we continue to follow this story.