Developing relationships and diversity in higher education, the final day of presidential interviews 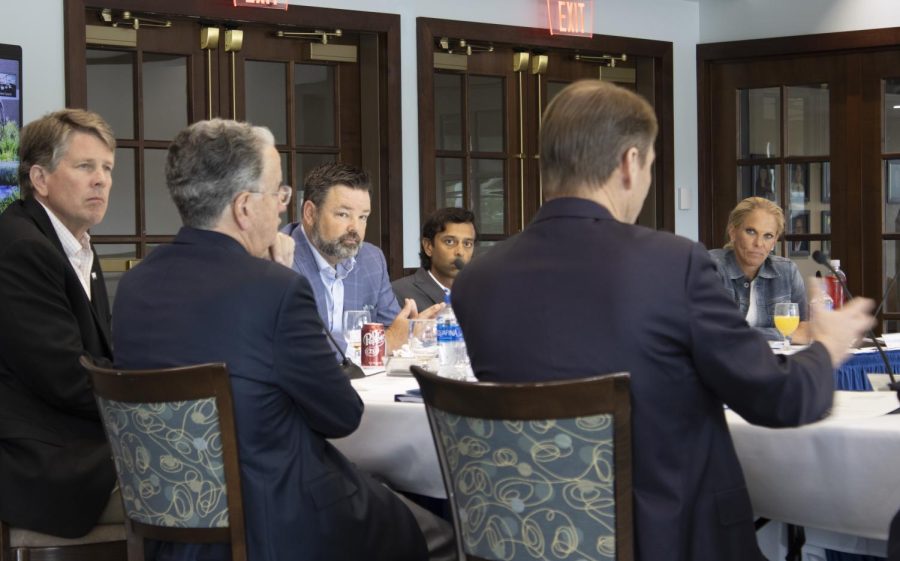 The University of North Florida Board of Trustees debates after finishing their four presidential candidate interviews on Saturday, May 14, 2022. Photo by Darvin Nelson.

A cloudy morning, the gloomy mood failed to penetrate the Talon Room’s cheerful energy as the University of North Florida Board of Trustees (BOT) interviewed the final two presidential candidates Saturday.

The day prior, nine board members met candidates Marc Miller and David Blackwell in a duo of two-hour-long meetings. That process repeated today as 11 board members interviewed candidates David Brennen and Moez Limayem.

Brennen is currently a professor and former dean at the University of Kentucky. Limayem is the current dean of the Muma College of Business at the University of South Florida.
What is your vision. . . or not?
Brennen focused on four key elements: “Who we are, who we serve, what we do and how we do it,” while incorporating diversity in nearly every single answer. And at the core of his argument? The adoption of practically a nonprofit mentality.

Limayem didn’t come with his vision, something he called “pretentious.”

“It’s our vision,” he instead said.

Part of creating a vision comes from hearing the thoughts of others—including members of leadership at UNF, the community and others to ensure everyone is on the same page and pushing toward the same goal.

The inner circle is Limayem’s brain, something he joked was small, and working to create “our vision” must begin by expanding that circle outward. As far as the vision itself is concerned, it should be towards excellence and take UNF to the highest possible level.
Growth is good, but what is the definition of good growth
“It’s really easy to grow,” Limayem said. “All you have to do is lower the bar,” but he says that’s not the way to do it.

To truly improve and move toward a brighter future, he says that strategically using analytics is key to improving student success and other goals. Being aware that people get tired is essential. Burnout is real; something Limayem made sure to mention.

Growth is an important goal for UNF, but Brennen warned the BOT to be careful not to “grow for growth sake.” There must be a direction for growth to strive toward. He gave the nursing program as one example, calling it an area that can be further developed and improved because employers are looking to hire people with those skills.

In Brennen’s eyes, universities should prepare students to do jobs that “haven’t even been thought of […] I don’t know what the future holds, but I do know it’s going to be different.”
The future of higher education
There are “looming challenges” facing higher education, Brennen says, and institutions must adapt to survive. To him, as long as schools allow students to build their passions, they will flourish in the future.

Universities must emphasize that students learn basic skills and simultaneously embrace diversity, inspire creativity and allow each student to develop their own beliefs. If Brennen were to become president, he’d like to focus on three overarching things:

Regarding accessibility, Brennen proposed walking his dog on campus to push how he wants to talk to everyone and learn more about them. Despite the current rule against dog walking on campus, the BOT seemed keen on the idea, as many smiled and chuckled.

UNF should become a “magnet” for students, employers, the community and donors, Limayem said.

Students should be attracted to UNF when they want a well-rounded education. Employers can trust UNF to produce skilled graduates. The community deserves a vibrant university, and when they have challenges, “one word should come to them: UNF,” he said.

For donors, they’ll be attracted to UNF because “we will give an amazing return on our investment.”

Limayem promises to come with a “microscope and telescope” if he becomes president. A microscope to take care of the concerns that need immediate attention and a telescope to work toward the future. He sees three ways UNF can expand and build:

Strengthening the relationship between UNF and Tallahassee year-round
Building genuine, authentic relationships
Being innovative and entrepreneurial

“I think a lot of universities suffer from doing everything online,” he expressed.

To Limayem, the university must develop a structure to create a desperately needed community online. Digital learning can be implemented to fit students’ demands, but that is not true for all courses.

“You’re killing them with PowerPoint face to face, and you’re killing them with PowerPoint online,” Limayem said. “The massacre is the same. The casualties are the same.”
Preparing for the rapidly approaching future
Citing a “demographic cliff,” Brennen warned that UNF, like universities across the entire country, will have to prepare for a drop in students looking to attend college. Beginning in 2025, freshman prospects are expected to drop by up to 15%, a statistic Brennen referenced.

Inside Higher Ed wrote in 2021 that this is “due to the decline in birth rate in the 2008 recession and lasting for years after. Those missing babies in 2008 would have begun entering college 17 years later, in 2025.”

There is a lack of agreement over where this cliff will have the most significant impact; Brennen acknowledged that but said he does know “it’s going to be pervasive.”
Leadership
If the BOT remembers nothing else, Limayem said, remember the term “relationships.” Building genuine, authentic relationships is a team effort.

“It’s a team sport,” he said. Yes, he would be the president but building a team that surrounds him with diverse identities and beliefs is essential to producing the most innovative and successful ideas.

“Every lunch a dean or president has alone in their office is a wasted opportunity,” he told the board.

Referencing his meet-and-greet pizza session with students, Limayem said he was impressed by how diverse and thoughtful the students were. Taking this to heart, he discussed how faculty and even himself could learn from those students and each other.

Asked about his leadership style, Brennen said he thinks about three terms: transparency, integrity and excellence. Maintaining a window into his work is key “so everyone knows how the sausage is made, so to speak,” he explained.

Honesty and integrity are core to any leader, he said. Everyone must see him as honest and with integrity in order for him to be a good leader. With excellence, he demands it so the institution is pushed further forward.

Brennen really emphasized the idea of shared governance and how everyone has a role to play at UNF.

Moving forward in the process
With interviews over, the BOT will meet from 8 a.m.-12 p.m. Monday to deliberate and eventually decide on the president-elect. Once selected, the Florida Board of Governors must approve them if they are to become UNF’s seventh president officially.

The meeting will be open to the public in the Talon Room (Building 16, Fourth Floor).

Stay with Spinnaker as we continue to follow this story.