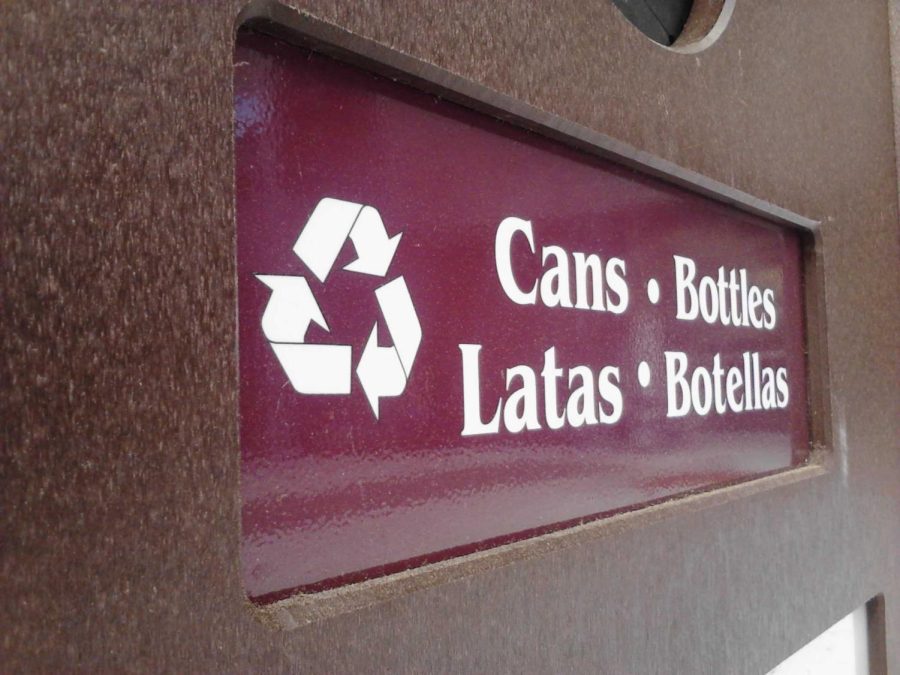 Recycling bins are just the beginning of UNF's aim to be green in 2013.

When entering the University of North Florida (UNF)’s campus, one is bound to notice the abundance of trees towering over the entryways. Combine that with the generous supply of recycling bins posted near every building’s corner, and it would appear that UNF is quite a sustainable campus. However, this is not the case.

On October 4, 2021, the city of Jacksonville’s curbside recycling pickup service was suspended. It was during this time that UNF began to remove many indoor recycling cans, contributing to UNF’s waste overflow. It would not be until April 4, 2022, before recycling pickup would resume. Like many others, I found myself upset and troubled over the impact that this could have on the environment. However, it also caused me to reevaluate my viewpoints and practices of sustainable efforts.

I remember hearing this several times growing up. Honestly, I can’t tell you that I really paid much attention to it. It was just one of those things like “Stop, drop and roll” that, despite being helpful, tended to drone on in the back of my head while a teacher chanted it from the front of the class. Fast forward to today, and I find myself thinking about it every week.

UNF has a lot of plastic waste: Abandoned plastic bottles from vending machines, plastic wrappers that conceal the plastic forks inside of them, straws, Panda Express bowls and the inevitable lost student I.D. card. I could go on. Much of the plastic ends up in a trash can or laying on the ground next to it, probably placed there by some well-intentioned student who carelessly missed the recycle bin. However, even if the waste had landed in the recycle bin, would it have done any good?

Much of the plastic waste on campus could be eliminated by reducing the amount used. For example, plastic-free eating and drinking utensils in food locations other than the Osprey Cafe could be a major step in reducing plastic waste.

I decided to reach out to a past English professor of mine, Bart Welling. I remembered being taken aback by many of the things he would teach us about the environment and how it was being destroyed. I thought he’d be the perfect person to talk to.

“I don’t think we’re anywhere near where we should be […sustainability hasn’t] been a priority for a while,” he said.

This is true. When I told him about my thoughts on plastic waste, he agreed that it was a problem. However, he said that eliminating plastic straws was one out of many more important things that could be done to increase the university’s eco-friendly efforts.

If you look around UNF’s campus, you’ll notice a lot of one thing: gas. Not from the cars of students, however, but from the shuttles, buses and golf carts. Skateboards and bikes can only carry one person at a time, so these are certainly useful, but there is another way to find eco-friendly transportation.

“We have these buses that should be electric buses,” Welling said.

When he first proposed the idea, I was all for it. However, I did wonder how feasible that idea was. Buses are costly, so an electric bus would be quite expensive, right?

The most common buses are diesel buses which can cost around $500,000. Hybrid buses can cost a little over $714,000, and fully electric buses cost about $800,000. However, upon doing research, I found that electric buses have low maintenance costs, making up for the gallons of diesel or gas that other buses use.

Despite the transportation system at UNF being decent, there are still students who do not use them. These students are often seen walking long distances from the parking lots to their classes. That usually leads to them racing inside to get away from the hot Florida weather where they will find most buildings freezing with cool air conditioning. Air conditioning uses tons of energy and subsequently contributes to an ironically warmer climate.

Welling thinks that building redesigns could help. “There’s very few places on campus where you could open a window,” he said, discussing the campus’ buildings. Solar panels on the rooftops could help, which, according to Welling, aren’t very expensive.

Welling isn’t alone in his call for change. He said that there have been other faculty that encouraged the university to divest from fossil fuels. There are also many students who are calling for the same things.

There is, however, a fourth step that I didn’t mention, “Remember”. Sustainability begins with mindfulness.