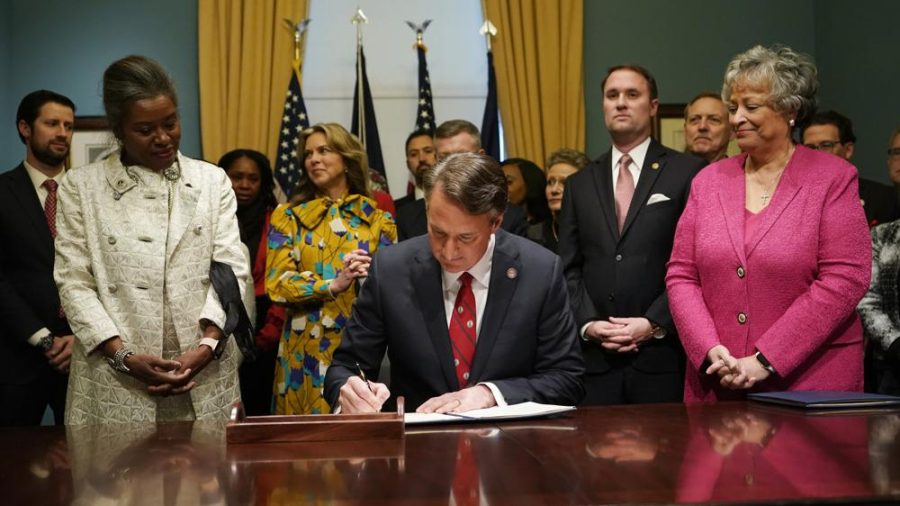 Virginia Gov. Glenn Youngkin, center, signs executive orders in the Governors conference room as Lt. Gov. Winsome Earle-Sears, left, Suzanne Youngkin, second from left, Attorney General Jason Miyares, second from right, and Secretary of the Commonwealth, Kay Cole James, right, look on at the Capitol, Jan. 15, 2022, in Richmond, Va. Virginia's Department of Education is conducting a review designed to root out critical race theory in schools. The review is the first thing Gov. Youngkin ordered after his inauguration and is expected to conclude later this month. Education officials have been reluctant to discuss what they've found thus far. While critics of the governor say critical race theory is a nonissue, others say there is ample evidence that the concepts have been embraced by administrators. (AP Photo/Steve Helber)

Over the past few years, critical race theory has been a main talking point when discussing race. More recently, it has become a political punching bag for predominately Republican politicians who have stated their disdain for the theory. However, despite the attention given to prohibiting critical race theory, few people have focused on what critical race theory is and what it entails.

Developed sometime around the 1970s and 1980s, critical race theory proposes the idea that racism is not just an individual problem but an institutionalized one. The concept of systemic bias is not new, nor is the fight against it. So, why is this theory so controversial?

“It’s turned into this sort of bogeyman,” University of North Florida (UNF) professor Bart Welling said about the public’s reaction.

Critical race theory is feared not so much for its ideals but for the locations in which it could be taught. Conservative parents and politicians alike claim the theory is being taught to elementary, middle and high school students, which they argue is inappropriate. However, there is little evidence that critical race theory is part of the curriculum at those levels of education.

But many American parents, both for and against it, argue that it is, in fact, being taught in lower-level education. Why is this?

Upon researching, the problem does not seem to lie solely on parents or even heavily misguided and opportunistic politicians, but instead on a lack of clarity as to what critical race theory entails.

The clearest thing about critical race theory is its tenets. These include the ideas that racism is a common part of American society, not an anomaly; interests convergence; race as a social construct; anti-essentialism; and counter-narrative. Its tenets are complex. Furthermore, they are a vague outline of what the theory can and can’t offer. That is to say, critical race theory isn’t scary, it’s undefined.

One of the tenets mentioned was anti-essentialism. Anti-essentialism teaches against the idea that those who are in a group or demographic think in the same ways. For example, people of one race often hold a multitude of views based on several factors. This theory contrasts with many mainstream thought processes, including liberal ones.

Essentialism is often exemplified during election periods—Black voters vote this way, Latino voters vote that way—and is often proven wrong. Ironically, though opposed by many conservatives, this very thought process could benefit them while alleviating their concerns of being vilified.

Critical race theory, for all its faults, does not seem concerned with making all white people be viewed as racists. If anything, it overlooks the individual white person in favor of the idea that the system itself is the problem, not the person. However, it seems that its conservative opponents primarily focus on the theory’s emphasis on the privilege received by white people from the racist systems of power.

Welling believes that the fight against critical race theory is a “backlash to lots of things…the summer of 2020, the George Floyd, Breonna Taylor protests.” This may be the case. Google Trends shows that the interest in critical race theory dramatically increased between the end of 2020 and the present day.

There are multiple forces driving parents and politicians to speak out against critical race theory. However, there does not seem to be much of an effort to replace critical race theory with a doctrine addressing the issue of racism in a clear and defined way that can be taught in K-12 schools.

Welling let me know that critical race theory is “really taught at law schools, especially grad schools.” So, there is certainly a void when having appropriate and serious racial discussions in lower-level education.

It is important to think of critical race theory as a start, not a finish line. Some of the greatest inventions began as faulty prototypes.