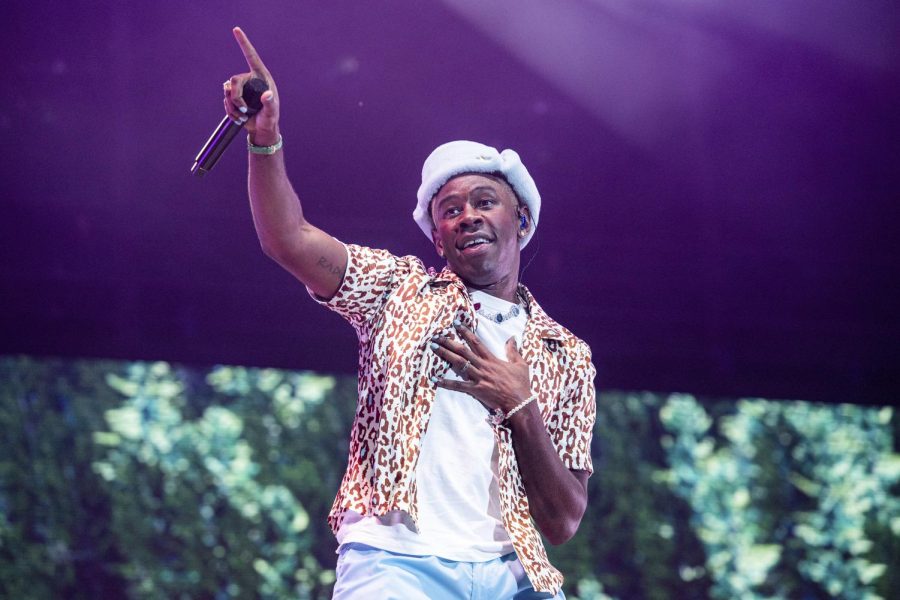 Tyler, The Creator. Courtesy of the Associated Press.

Founder of his own record label, Odd Future, Tyler, the Creator is a multifaceted, Grammy award-winning artist.

In Ladera Heights, California, Tyler was born as Tyler Gregory Okonma in 1991. His fascination for music ignited when he was young. Tyler decided to learn piano on his own and quickly became a proficient musician at 14 years old.

In 2007, Tyler assembled the hip-hop/rap group, Odd Future, with Hodgy Beats, Jasper Dolphin, and Left Brain. In November 2008, the group released their debut album The Odd Future Tape. In 2009 and 2010, the rap collective welcomed new artists including Frank Ocean and Earl Sweatshirt.

While performing and touring with Odd Future, Tyler began his solo career and released his debut album Bastard in 2009. XL Recordings then gave him a one-album deal. Tyler recorded and released his second album Goblin, leading him to win “Best New Artist” at the MTV Video Music Awards.

At the 62nd Annual Grammy Awards, Tyler won “Best Rap Album” for Igor, his fifth studio album, released in May 2019. The album gave Tyler his first number one hit on the Billboard Artist 100 chart. The next year, Tyler won another Grammy for “Best Rap Album” for Call Me if You Get Lost. Earning Tyler another Billboard hit, Call Me if You Get Lost ranked number one on the Billboard 200 Albums chart in 2021.

On Twitter, Tyler joked about his fans being indifferent when he previously opened up about his sexuality.

“I TRIED TO COME OUT OF THE D*** CLOSET LIKE FOUR DAYS AGO AND NO ONE CARED…” Tyler said in the tweet.

Tyler alluded to his sexuality in the song I Ain’t Got Time, released in 2017.

From Call Me if You Get Lost, the track WUSYANAME is a hip-hop/rap collaboration between Tyler, YoungBoy, and Ty Dolla $ign.

Bright synth, bass guitar, and a mellow drumbeat assemble, creating a hip-hop groove under the three rappers as they contribute various vocal riffs.

Less than a bar of instrumental cessation allows Tyler to introduce the first verse. His rap is doubled with another vocal track. Ty provides warm, contrasting vocal embellishments between Tyler’s phrases.

YoungBoy bears the second verse in a rap while melodic vocals continue behind him.

When the chorus emerges for the last time, Ty emits an abundance of vocal riffs. The mixture of the artists’ timbres gives texture to the repeated melody, bringing the song to its closure.

Tyler, the Creator’s music can be found on Spotify, YouTube, and Apple Music.