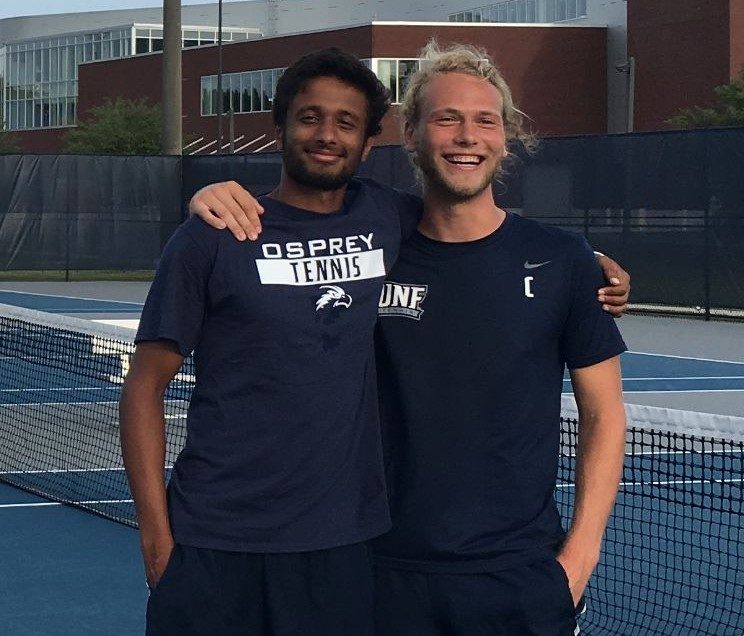 “We came up with the idea during COVID, like, when we were in quarantine we started building it out,” said Sahil Deshmukh, the co-founder of the new app, MyPro. “It literally started on a piece of paper.”

Both former University of North Florida (UNF) tennis players Deshmukh and Till Von Winning became friends and later roommates during their time at UNF. The pair said they had always discussed why tennis players seemed to be the only college athletes to profit off their skills by teaching private lessons. After graduating from UNF, they kept in touch, both going on to pursue master’s degrees and continuing to ponder the issue that would later become their business idea.

“When kids grow up, if they’re into sports, they look up to college athletes or want to become one,” Von Winning explained. “So we thought there was an opportunity for the student-athletes where they can use their skills and, I guess, love of the game and give it to the next generation.”

The pair set out to create an app that connects college athletes with sports-loving kids. The idea is that the college athletes will make some extra income by teaching private lessons, while the child will connect with students from their nearby college, learning what it takes to compete on the collegiate level.

Another idea behind the app is to build a sense of community among college athletes and the cities they live in. Both Deshmukh and Von Winning were international students at UNF, and they both felt it was hard to be a part of the greater Jacksonville community, given their foreign status.

Deshmukh is from India and Von Winning is from Germany. They explained that UNF’s men’s tennis team was very international during their time as teammates, and Von Winning believes there was not a single American on the team during his time there.

“With teams that are quite international, or with players that come from all over the country, they often don’t really have the community impact,” Von Winning said. “But if the student-athletes in each sport interact with the community […] we thought it would be a good thing.”

“On top of that,” Deshmukh added, “we’re kind of helping out schools, helping the Jacksonville community, for example, to be kind of involved in college sports.”

A new National Collegiate Athletic Association rule, announced in June 2021, allowed college athletes to profit off their name, image and likeness. This announcement made MyPro possible for college athletes because the student-athletes could use the app to brand themselves and begin coaching as college athletes.

With that, Deshmukh and Von Winning started working with a software company in India to develop their app.

“We had meetings, I think for like three months, always from like, midnight till 2 a.m., and then we had work the next day,” Von Winning explained. “So sometimes we mixed it up, sometimes he took them, sometimes I, and most of the times we took them together.”

The app officially launched May 8, and now the pair faces a new challenge of learning to market and promote their new business.

“How we reach other people in terms of marketing is a trial and error. I don’t think there’s a foolproof plan of how to do it,” Deshmukh said.

The former UNF tennis players said they have been reaching out to different schools, country clubs and homeowners associations to spread the word about their new app and get feedback from the community. They estimate they have about 35 college athletes connected to the app, ready to start coaching.

All of the prospective coaches on the app are enrolled in college. Currently, they focus on a Jacksonville market, with college athletes from UNF, Flagler College and Jacksonville University. As Deshmukh and Von Winning learn what works and what doesn’t in their new business, they hope to eventually expand across the nation.

“It’s a little hard because, if I was an athlete and I saw someone randomly messaging me [about the app], I’d probably blow them off,” said Deshmukh. “But we’ve gotten, surprisingly, some good feedback on it. Once it slowly comes out even more and once athletes start using it and it’s moving, I think then it will grow by word-of-mouth.”

Although they are both familiar with tennis, they hope to get as many sports involved as possible. Certain rules around teaching swimming make competitive swimming lessons unavailable on their app, but they are looking for athletes from all other sports.

For now, the friends and business partners both work jobs outside of MyPro while they learn from their experience of owning and operating a new business.

“I think we work pretty well together, even going back to UNF,” Deshmukh said. “All our time management and working in a team, I think all of that kind of influences how we work now.”

UNF athletes are invited to sign up to teach private lessons through the MyPro app.

[Eds Note: This article has been reposted after being taken down to correct a posting glitch.]