Pride and pandering: Are companies supporting equality or good PR? 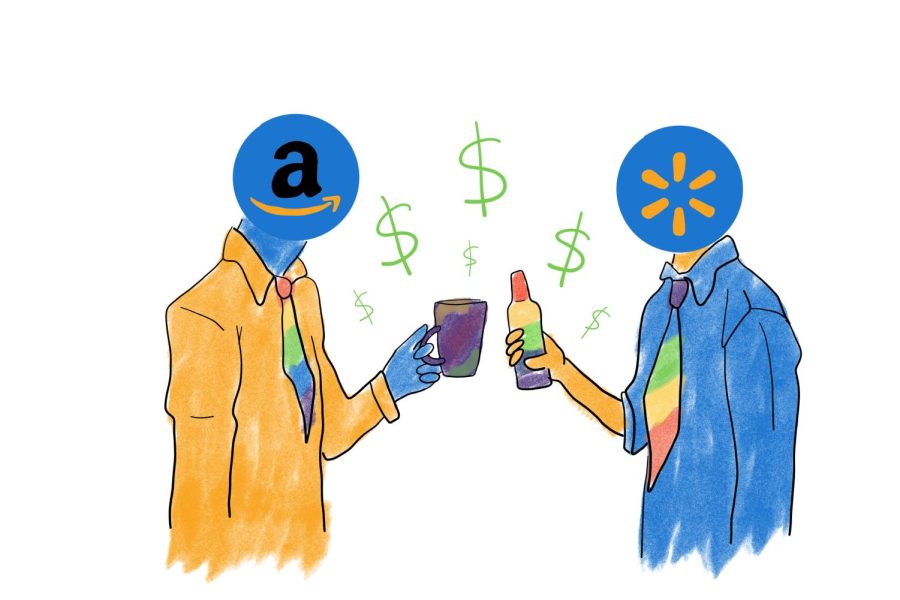 Pride Month in June celebrates equality and justice for the LGBTQ+ community, creating opportunities for corporations to market off the rainbow-themed festivities.

While pandering to the queer community in hopes of making a profit may feel phony, corporate support of Pride does provide representation to a historically oppressed community, even if the intention behind “supporting” Pride may be financial gain and good publicity. Is a surface-level corporate ally good?

“You need to be educated,” UNF LGBTQ Center Director Manuel Velasquez-Paredes said. “Just because something has a rainbow on it doesn’t mean it’s good.”

Consumers need to educate themselves on how businesses operate and the behind-the-scenes actions they take to support (or not support) the LGBTQ+ community, Velasquez-Paredes explained. Sometimes companies will release a “Pride collection” in June with items covered in rainbows for sale but not make efforts to advance rights and equality for queer people.

An example of this is Walmart. Although Walmart released a “Pride & Joy” collection this year, they also donated about $400,000 from 2019 to 2020 to three Republican candidates who voted against the Equality Act, according to Business Insider.

“It feels like it’s very conditional support, that [some corporations] will only support you if you are making them money or helping their reputations so they can make money,” UNF Pride Club President Sam Rakita said. “That means that a lot of identities get left behind because they’re just not profitable.”

Rakita described never seeing businesses put out anything in support of intersex pride and rarely seeing anything supporting aromatic identities in the past, beliving that businesses may not view these identities as “marketable.”

“They’re willing to put ‘they/them’ pronouns but won’t put ‘ze/zem’ pronouns on a shirt,” he said.

Another frustrating aspect of corporate Pride celebrations for Rakita is that many businesses only seem concerned with the fun part of Pride, not educating themselves on what products the queer community could benefit from having.

“[Companies] want to be there for the party, they want to sell the clothes for the Pride parade and the party decorations, but they don’t want to sell actual practical items,” Rakita said. “I’ve never gone into a store and seen dental dams next to the condoms. I’ve never seen, you know, women’s shoes in a size above the standard, or men’s shoes below, because they’re only there for the fun aspect.”

While some businesses fail to understand the specific needs of their LGBTQ+ customers, the support corporations show during Pride month can still hold positive aspects.

Velasquez-Paredes explained that corporate Pride helps him know where he wants to spend his money.

“It allows us to be able to figure out which organizations want to be visible around LGBTQ issues,” Velasquez-Paredes said. “There are certain organizations that have made it very clear they want nothing to do with the LGBTQ+ community […] I want to make sure that I am using my dollars to go to organizations that are going to be allies.”

Companies like Chick-Fil-A, Home Depot and Hobby Lobby are on Velasquez-Paredes’ list of places not to go. Although he said pandering during Pride month isn’t the best way to actually support queer people, companies being willing to attach a rainbow to their logo does hold weight.

“Even if it’s just for public perception, […] the fact that it’s marketable- If you’re a 14-year-old kid in the closet, it’s such a nice thing to see, to walk out and say, hey, people are thinking of me and that it’s celebrated and it’s normal,” Rakita explained.

Also, buying “silly tacky” Pride-themed things can be fun, Rakita said. Although he said he enjoys seeing some of the things businesses come up with for their Pride collections, Rakita mentioned that companies need to do better at understanding the history and context of how some of their products are used in the LGBTQ+ community.

“I’ve seen a lot of alcohol brands recently releasing Pride-themed beer. Bud Light, I believe, did that without knowing anything about the long history of alcohol in the queer community,” Rakita said. “There isn’t a consideration for the environment in which these items are going out into.”

Both Velasquez-Paredes and Rakita explained that the best way companies could support Pride is to implement lasting changes that take care of their queer employees. Things like sensitivity and anti-harassment training, providing health care, not supporting anti-LGBTQ legislation and simply listening to members of the queer community are stronger ways to support Pride than releasing rainbow T-shirts, according to Velasquez-Paredes.

Target was an example Velasquez-Paredes and Rakita gave of a company headed in the right direction of supporting the LGBTQ+ community year-round. Target collaborates with queer artists for their Pride collection and donates money supporting queer issues even outside the month of June.