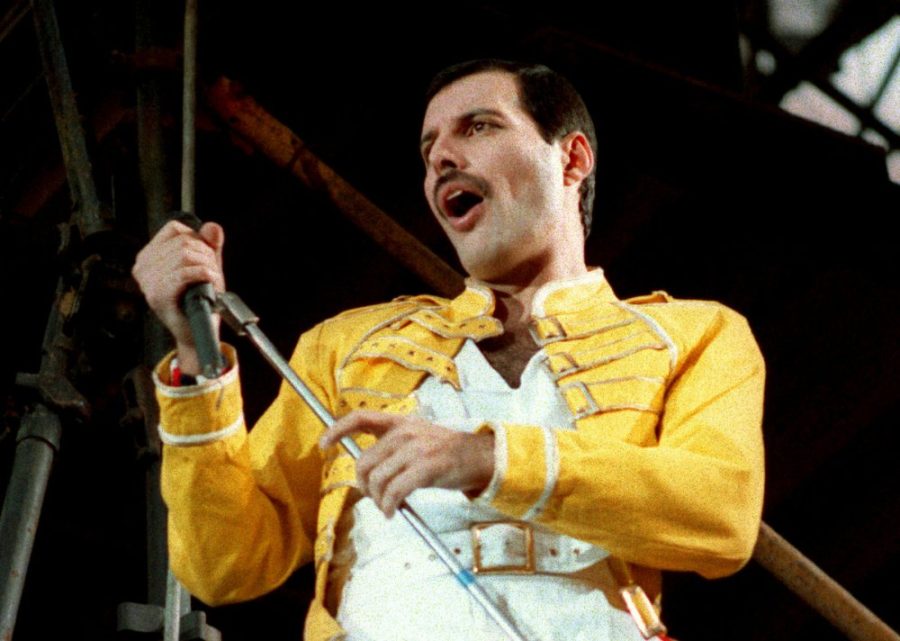 FILE - In this July 20, 1986 file photo, Queen lead singer Freddie Mercury performs, in Germany. A previously unheard and unreleased song by Mercury was released Thursday, June 20, 2019. Universal Music announced that the track, “Time Waits for No One,” was originally recorded in 1986 for the concept album of the musical “Time” with musician Dave Clark. A video to accompany the song was also released and includes unseen performance footage of Mercury. It was recorded in April 1986 at London’s Dominion Theatre. (AP Photo/Marco Arndt, File)

Musical icon Freddie Mercury built a rock legacy as the lead singer of the band Queen.

His birth name was Farrokh Bulsara but he changed his name to Freddie Mercury in 1970 at Queen’s first show. While he was referred to as ‘Freddie’ since he attended school in India, he was inspired to add ‘Mercury’ to his stage name by a lyric in one of Queen’s songs, My Fairy King.

When his family moved to London in 1964, Mercury enrolled in the Ealing College of Art and earned a degree in graphic art and design.

After Mercury’s graduation, he became friends with members of the band Smile. When the lead singer Tim Staffell left Smile for a different musical career, Mercury became the lead singer. Brian May continued to play guitar while Roger Taylor played drums. John Deacon joined the trio in 1971 as a bassist and the group renamed themselves as Queen.

By 1973, Queen released their first self-titled album. They released their second record Queen II in 1974. It wasn’t until they released Sheer Heart Attack that they started getting international attention. One of the band’s most popular songs, Bohemian Rhapsody, from their fourth album, A Night at the Opera, was a work majorly written by Mercury, according to Britannica.

Being Queen’s first U.S. top 10 hit, Bohemian Rhapsody was inducted into the Grammy Hall of Fame in 2004. In 2021, the Recording Industry Association of America certified the anthem as “diamond” after it surpassed 10 million sales in the U.S. This made Queen the first British band to have a certified “diamond” song.

Even with Queen’s success, Mercury began releasing his own music with his debut solo album Mr. Bad Guy in 1985, including ballads and disco-inspired songs. The single, I Was Born to Love You, earned a place on the Billboard Hot 100 chart.

Mercury never put a title on his sexuality but had public relationships with both men and women. It is speculated that Mercury may have kept his sexuality undisclosed because of the homophobic society at the time of his career, according to Biography.

On November 24, 1991, Mercury died of AIDS-related complications. It was not until a day before his death that Mercury announced he tested positive for HIV/AIDS.

“Following the enormous conjecture in the press over the last two weeks, I wish to confirm that I have been tested HIV positive and have AIDS…I felt it correct to keep this information private to date to protect the privacy of those around me. However, the time has come now for my friends and fans around the world to know the truth and I hope that everyone will join with me, my doctors and all those worldwide in the fight against this terrible disease,” Mercury said in the announcement, according to Smooth Radio.

Before his death, Mercury and Queen recorded what would be their final album, Made in Heaven. Queen released the album in 1995.

Roger Taylor, Brian May, and Jim Beach founded the Mercury Phoenix Trust soon after Mercury’s death to raise funds and awareness for HIV/AIDS. The trust continues to globally support those suffering with the disease.

The original soundtrack from the 2018 documentary Bohemian Rhapsody contains an array of Queen’s live performances and remastered classics.

Killer Queen, originally released in 1974, was remastered in 2011 and is featured in the documentary.

Snaps introduce the tempo of Killer Queen. Mercury comes in on the vocal melody, accompanied by an acoustic piano. At first, the piano only plays the chords in the right hand, staccato on each beat. After two bars, the left hand introduces descending octaves. Bass guitar, drum set, and electric guitar are quick to follow.

Background (BG) vocals swell in the latter of the first verse.

Mercury sings the pre-chorus without supporting vocals. The piano repeats an ascending line played in triplets before transitioning back to the staccato chords.

Various effects enhance the vocals as the BG voices stray from the melody in the chorus. While Mercury’s vocal melody descends diatonically, the BG vocals ascend chromatically before sustaining the dominant.

An electric guitar plays a solo line with a complimenting harmony between the chorus and the second verse.

After Mercury and the acoustic piano introduce the verse, a snare drum roll reintroduces the bass and electric guitars as well as the drum set. Elaborating on their previous part, the BG vocals remind listeners of the chorus while Mercury sings the verse.

Contrary to before, the BG vocals offer a reiteration of Mercury’s lyrics in the pre-chorus. The bass guitar then mimics the BG vocals melodically in the next phrase.

One distorted guitar embellishes the melody in the absence of the vocals while another supports the chords with the rest of the band. The harmonizing electric guitar solo interlude leads into the bridge.

Vocals reemerge while the distorted electric guitar lingers. The familiar staccato chords and BG vocals prevail in the bridge as the drums take the opportunity to digress from the four-on-the-floor beat.

Instead of a dramatic ascending vocal glissando expected in the chorus, Mercury and BG vocals descend before electric guitars conversate to end the piece.

Queen’s music can be found on Spotify, YouTube, and Apple Music.

Freddie Mercury’s solo music can be found on Spotify and Apple Music.