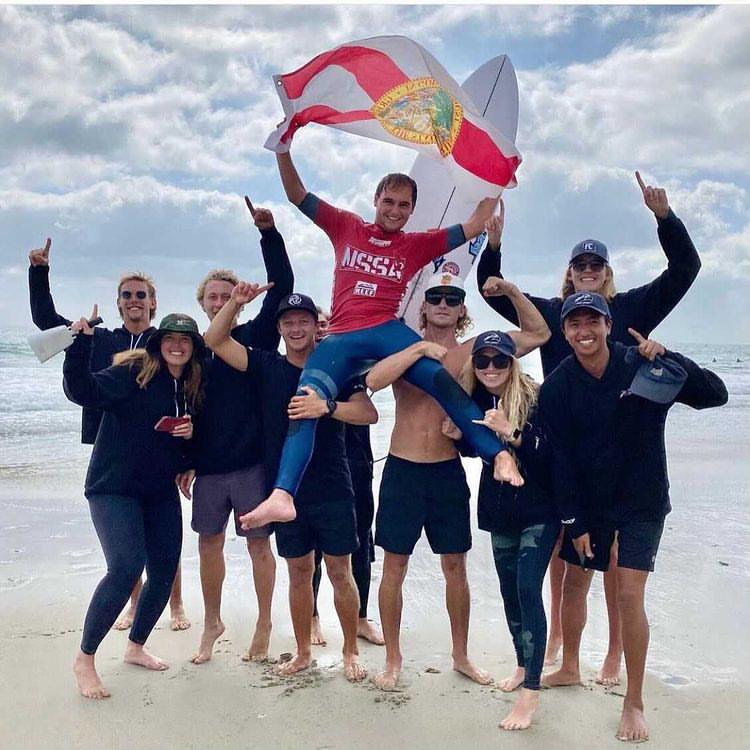 “I caught the very last wave of the final heat, and through the last 30 seconds of the final, I was in the shore break, and I look back at my whole team running down to the water to cheer me on and ring cowbells and stuff, all psyched up,” recounted Speir on his most memorable moment from the contest.

Speir has been competing in NSSA Championships since he was about ten years old, but this was his first time competing at the national collegiate level. He said his previous experience helped him know what to expect but didn’t necessarily put him at a huge advantage because many of his competitors had also been in NSSA contests since childhood.

Living and surfing in Florida also introduced a bit of a disadvantage for Speir and the Surf Team because the waves in Florida are usually not as good as those in California, said Speir.

“California has good waves almost every day, and it’s very irregular that the waves are as poor as they are [in Florida],” Speir said. “Right now, it’s likely going to be flat for the rest of the summer, so no waves, while [Californians are] getting pumping waves all summer, so they actually have more of an advantage.”

Despite this, UNF’s Surf Team placed fourth in the nation for college surfers, and Speir claimed the title of shortboard champion among the college men.

“The energy was insane,” CJ Rogers, the Team’s vice president, said . “Even though we didn’t take the win as a school, to go out and watch your friend and your teammate take the win over everyone, and we got to fly the Florida flag.”

The Team arrived in California a few days before the contest so they could practice and adjust to the West Coast waves. Rogers described waking up early every day with his Team to practice, saying the waves on the day of the competition were the biggest.

After overcoming the “first round jitters,” Rogers went on to get one of the best scores in his first heat. Some team members went on to make the quarterfinals, and the Team’s treasurer, Sophie Falzone, made it into the semi-final heat.

“There was really, really, really tough competition this year,” Charlie Current, the Team’s captain, said “I was really impressed by how many surfers in college were surfing that well.”

Besides the tough competition, a challenge for the Team was funding their way to California, Rogers said. Since surfing is considered a club sport at UNF, Rogers and Current explained that the Team had to work to fundraise for the trip.

“It’s expensive,” Current explained. “We all had to pay for our own place out there, pay for our Air BnBs, our sponsors helped, but the entry fee to even compete in Nationals is $1000.”

Current gave credit to UNF for helping pay for the Team’s rental cars and hopes that their success will help earn the Team more support from the school in the future, encouraging more talented surfers to enroll in UNF and join the Surf Team.

“She’s the one that kind of put the whole trip together and kind of kept everyone in line to make sure everything was running well,” Speir said.