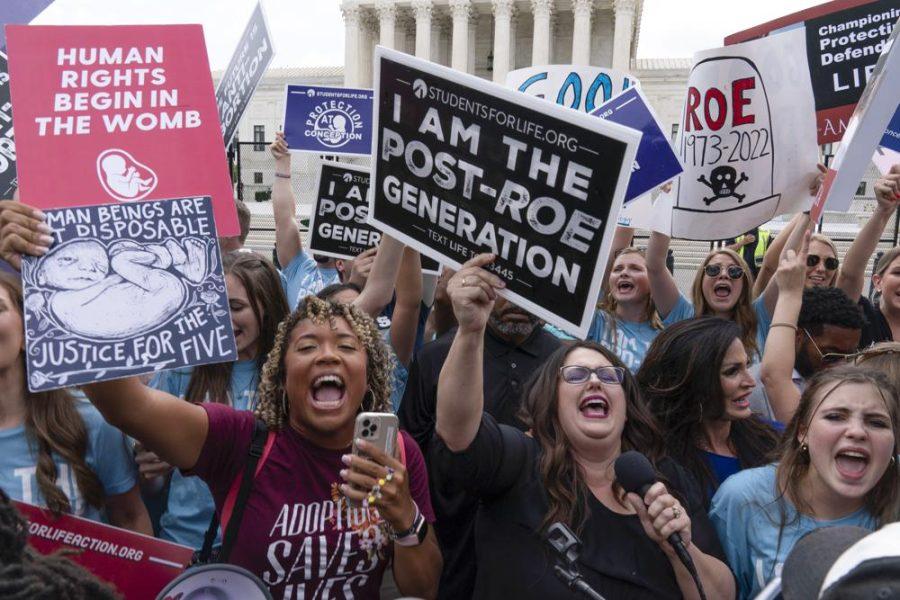 Demonstrators gather outside the Supreme Court in Washington, Friday, June 24, 2022. The Supreme Court has ended constitutional protections for abortion that had been in place nearly 50 years, a decision by its conservative majority to overturn the court's landmark abortion cases. (AP Photo/Jose Luis Magana)

Roe v. Wade was overturned in a 6-3 Supreme Court decision Friday morning, nearly 50 years after the case set the precedent that abortions were protected by the Constitution. With the case overturned, abortion in the U.S. is no longer a constitutional right.

“We hold that Roe and Casey must be overruled,” Justice Samuel Alito wrote in the ruling’s majority opinion. “The Constitution makes no reference to abortion, and no such right is implicitly protected by any constitutional provision.”

“I would decide the question we granted review to answer—whether the previously recognized abortion right bars all abortion restrictions prior to viability, such that a ban on abortions after fifteen weeks of pregnancy is necessarily unlawful,” Roberts wrote in his dissenting opinion. “The answer to that question is no, and there is no need to go further to decide this case.”

“Whatever the exact scope of the coming laws, one result of today’s decision is certain: the curtailment of women’s rights, and of their status as free and equal citizens,” Justice Stephen Breyer wrote in his dissent.

A majority of American adults, 61%, say that abortion should be legal in all or most cases, according to a recent Pew Research Center survey. Without this case as precedent, abortion ban laws will take effect.

As it stands, abortion is protected by Florida’s state constitution by a privacy amendment. For now, even though Roe v. Wade has been overturned, abortions in Florida are legal.

Governor Ron DeSantis recently signed a bill banning abortions after 15 weeks, which will take effect July 1. The bill changes Florida’s previous law allowing abortions until 24 weeks of pregnancy. The new bill does not make exceptions for cases of rape or incest.

“House Bill 5 protects babies in the womb who have beating hearts, who can move, who can taste, who can see, and who can feel pain,” DeSantis said when the bill was signed. “Life is a sacred gift worthy of our protection, and I am proud to sign this great piece of legislation which represents the most significant protections for life in the state’s modern history.”

Thirteen states already have abortion ban laws drawn in the case that Roe v. Wade was overturned, according to the Associated Press (AP).

“Another half-dozen states have near-total bans or prohibitions after 6 weeks of pregnancy,” AP wrote in a tweet.

The decision not only affects a woman’s right to autonomy but to other freedoms, according to Representative Anna Eskamani (D-Orlando), who said, “We cannot forget that this fight goes beyond abortion, this decision is tied to other freedoms we have fought for, including same-sex marriage and access to contraception.”

Justice Clarence Thomas has called for the court to revisit more past decisions concerning contraception and same-sex marriage.

“Today is a historical day, and by that, I mean it is a day that sounds like it belongs in history and not the modern-day,” said Leader Pro Tempore Representative Kamia Brown (D-Ocoee)

“I think God has had his hands in this from the very beginning,” Mississippi Representative Becky Currie (R) said, commenting on the decision.

The controversial ruling was quickly met with a national outcry, and abortion activists in Jacksonville have already planned protests. Woman’s March Jacksonville plans to rally in front of the Duval County Courthouse at 6 p.m. Friday night.

“This is a disgusting and shameful day in our country but we will NOT take 50 years of steps backwards, progress be damned,” the group’s Instagram post read.

Students for a Democratic Society (SDS) at the University of North Florida announced they will join the protest to “stand up and fight back against this rolling back of rights,” they wrote in an Instagram post.