‘We need to take action’: Protesters respond to SCOTUS decision at Jacksonville rally 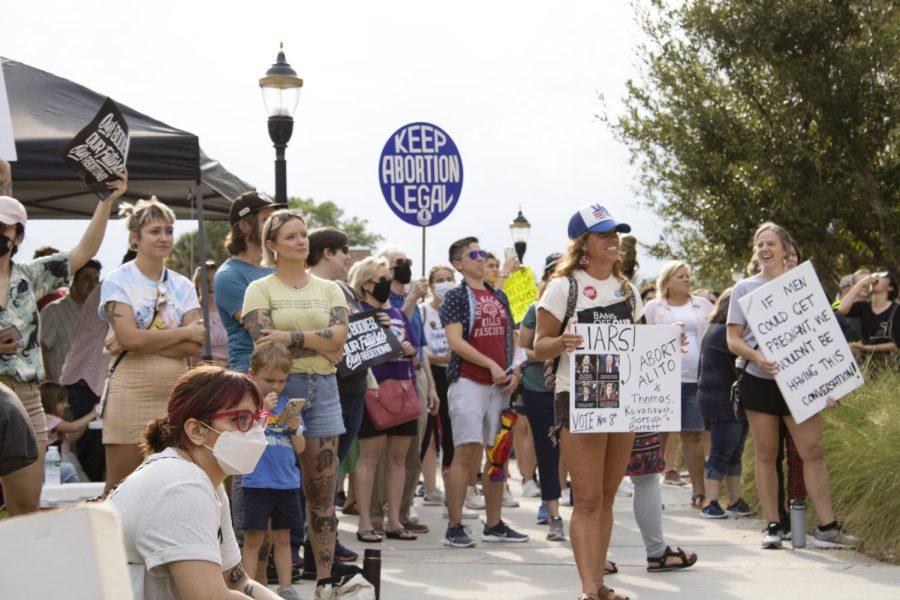 People of all ages came to protest for abortion rights on Friday, June 24, 2022.

Waist-high orange barricades drew a line down the middle of the Duval County Courthouse lawn as hundreds of protesters rallied in downtown Jacksonville Friday evening. With signs raised in the air, their chants echoed loudly off surrounding buildings as they protested the Supreme Court’s 6-3 decision to overturn Roe v. Wade.

Organized by Women’s March Jacksonville, protesters listened to community members, young activists and state representatives talk before marching through the streets of Jacksonville.

Speakers discussed how the Supreme Court’s decision would dramatically affect lower-income people and people of color.

/10 The crowd is continuing to expand as rows and rows of signs are pushed up in the air. “We’ve got power in numbers … these are people coming out in 90° weather,” a speaker just said in a passionate speech.

Florida House of Representatives Member Angie Nixon was among the slew of speakers who told their stories, spreading a message of unity and action among the crowd.

“[…] If it was really about supporting life, we would have free comprehensive healthcare for all […] I know a lot of us are sad today, but we cannot be paralyzed,” she said. “We need to take action and not live in fear. We don’t need to be helpless and hopeless, that’s what they want. We need to use this righteous anger and frustration and turn it into action. ”

Other speakers also highlighted the necessity of showing up to vote in the upcoming elections and how this decision was only the beginning of legislation passed against transgender and other LGBTQIA+ groups.

“This [is] not just about women, we need male allies,” another speaker yelled. “[To all males here ] thank you for coming out here, but next time bring your friends, for F***s sake!”

As the rally went on, people with packs of water bottles, megaphones and countless signs joined to form a crowd that eventually grew well into the hundreds. Numerous cars honked their support as they passed.

“Fight fight fight, abortion is a right,” echoed across downtown Jacksonville as protesters took their message to the streets for a march, spreading their anger.

Molly Kirkwood, 18, criticized pro-lifers that are “fighting so hard for kids that are unborn” when there are kids already living but have been left behind.

One safety marshal told Spinnaker they didn’t know much about the issue but wanted to help people regardless.

“I’m just out here trying to make sure everyone stays hydrated,” they said.

A pro-choice protester walked along the back of the crowd yelling “repent [your sins],” to which many members of the crowd turned around and told them to leave.

Protesters in Jacksonville join thousands more across Florida and the entire country as Americans attempt to deal with the rush of emotions this decision brings. More protests are expected from the Capitol to California as another is already scheduled for Jacksonville.

The “Proud to Say Gay Rally,” organized by the Trans Awareness Project, will happen in front of the Duval County Courthouse at 3 p.m. Saturday afternoon, according to an Instagram post.