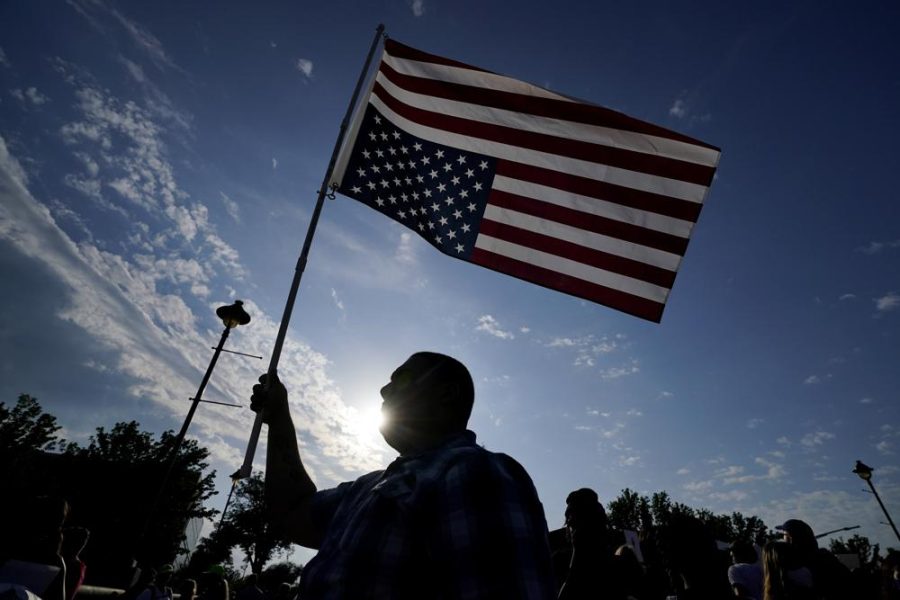 Abortion-rights protester Ryan Maher, of Des Moines, Iowa, carries a flag during a march to the Iowa governor's mansion, Friday, June 24, 2022, in Des Moines, Iowa. The Supreme Court has ended constitutional protections for abortion that had been in place nearly 50 years — a decision by its conservative majority to overturn the court's landmark abortion cases. Friday's outcome overturning Roe v. Wade is expected to lead to abortion bans in roughly half the states. (AP Photo/Charlie Neibergall)

The past two months have been filled with highly emotional protests. While some Americans celebrate the decision, others wonder, “What’s next?” as Justice Clarence Thomas states his desire for the court to look into other rulings.

During unprecedented times of daily protests, social unrest, angst and distrust in the Supreme Court, I’ve found myself listening to several arguments. One thing I have noticed is the heavy presence of fear.

Some fear loss of rights. Others fear the court’s legitimacy has been lost, while some worry about the influx of children that will be born into a system that has not built a solid infrastructure of healthcare.

There are several concerns made by pro-choice activists, many of which get lost in the sea of criticism and judgment. However, one concern sticks out as being extremely relevant given last week’s decision. Poverty.

A recent study stated nearly 11 million American children were considered poor or living in poverty. Furthermore, as children can not take care of themselves, they are disproportionately the poorest group in the United States. In a country that has the highest GDP by over $7 trillion, this should not be the case.

As mentioned previously, the United States healthcare system is not what it should be. Furthermore, the country spends more of its $19 trillion GDP on healthcare than any other country. However, according to a recent study, America ranks last.

There is another fear that I failed to mention earlier—maternal mortality. Despite medical technology getting better, the maternal mortality rates, as of 2020, have risen. In 2020, 861 women died due to pregnancy-related reasons. Furthermore, the surge in mortalities has impacted Black and Hispanic women disproportionately.

It is worth noting that these issues are not lost on many pro-lifers. A recent article published by The New York Times tells the story of a mother and victim of domestic violence left stranded with four children and another on the way. The mother was contacted outside a clinic by a pro-life charity, Blue Haven Ranch, which supplied her family with food, clothes and money. However, how much money is there?

Charities often work on donations, and Blue Haven Ranch is no different. Upon the Supreme Court’s ruling, they received over $25,000. But how sustainable is this system? It is my belief that giving to the less fortunate is highly virtuous, but not everyone shares that viewpoint. A country based on individualism will struggle with an issue that is systemic.

Conservative politicians have made names for themselves as a party that often focused on taking funds away from corporations and even schools. I’d argue investing money is as powerful, if not more powerful, than divesting. This is the same party that recently had its challenge to the Affordable Care Act, which covers midwifery and 43% of births, overturned by the Supreme Court recently. So, what, exactly, is their goal?

Pro-life activists and the Republican party, though they intersect often, are not one and the same. Many pro-life organizations follow a moral conviction based on their belief in God, independent of politics. However, others have no religious ties. This is the case with the University of North Florida’s pro-life club. Furthermore, some are liberals or share some left-leaning beliefs, as is the case with Pro-Black Pro-Life, a pro-life group that also supports racial equality. However, the GOP has made anti-abortion beliefs one of their most prominent issues. So to completely neglect expectant mothers inadvertently gives a level of credibility to the claims of pro-choice activists.

Research shows that much of the pain and heartache endured by women in labor is, in fact, avoidable. In some cases, better access to midwifery can assist in tending to the needs of expectant mothers. Other cases are more difficult as they have to do with a system of racist practices that have existed for centuries. However, all of these deal with a system of inequality that overwhelmingly affects the poor. In order to fix this, we must address the longstanding oppressive policies.

This year alone, the GOP and Democratic parties each raised over $700 billion in campaign money, yet very little has changed to help those in poverty. In order to see a change in America, we must hold politicians accountable.

Politicians work for us, not the other way around.