OPINION: Why you should keep fighting 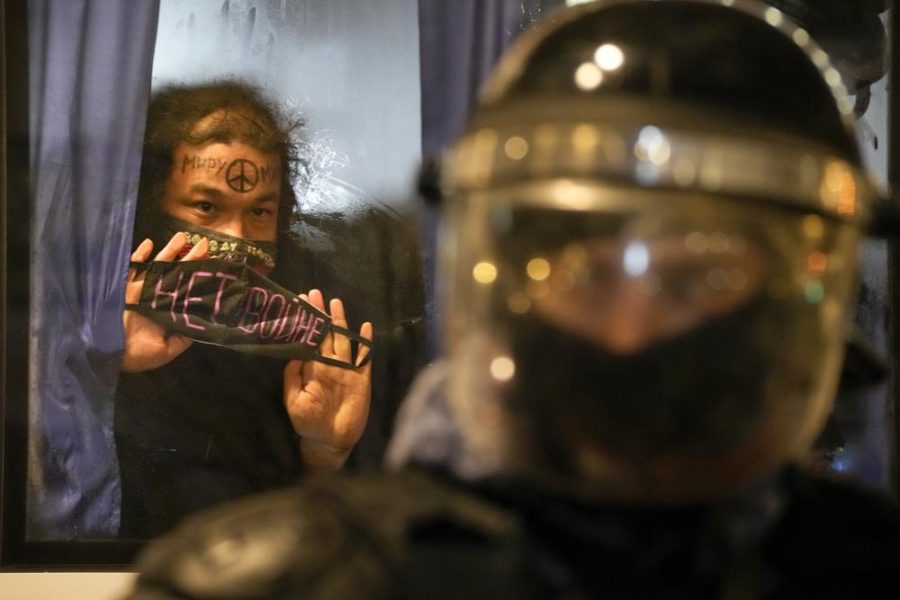 A detained demonstrator shows a sign 'No War!' from a police bus in St. Petersburg, Russia, Thursday, Feb. 24, 2022. Hundreds of people gathered in Moscow and St.Petersburg on Thursday, protesting against Russia's attack on Ukraine. Many of the demonstrators were detained. Similar protests took place in other Russian cities, and activists were also arrested. (AP Photo/Dmitri Lovetsky)

Inflation, the Ukraine-Russia war, the threat of a global hunger crisis. It seems every week there is a new issue dominating the 24-hour news headlines.

Times are harder than before. With civil unrest around the world, it’s hard not to notice. It can be hard to balance the constant fight for justice while not stressing out. We are living in tough times, and it can be a struggle to keep going. So, in times like these, how do we remain perseverant?

There was a time when I ignored the news. It was a lot easier to pretend the world was OK when you didn’t listen to its problems. However, in more recent times, I’ve found myself keeping a relatively close ear to politics, both local and global. And though the news can be frightening, it’s not the sole source of stress in my life.

Like many students, I have to balance work, school and my personal life. At various times, I have found myself overwhelmed by just one of the three. It’s as if I’m climbing uphill, but I’m still unsure of where I’m going. It is in these moments I face the familiar feeling of existential confusion. My head begins to fill itself with questions about life and my purpose. Questions that begin in youth but often persist well into adulthood.

Furthermore, there is still the larger fight at hand. Fights for social justice that existed 50 years ago are still going on today. The Stop WOKE Act and the attack on voting rights come to mind. Many of these issues have been rebranded and, to a new, less informed generation, may seem like completely new issues. These feelings of circular progress leave one wondering if things will ever change. Furthermore, for all the dictators and fascists of days past, there are new ones wreaking havoc on the modern world.

However, despite being surrounded by dire circumstances, it is important to remember that evil always loses. Granted, I am a self-proclaimed optimist, but I do believe that there is objective truthfulness in my viewpoint.

I think back to all the evil leaders that have existed— Mussolini, Hitler, I could go on. Yet, despite their various acts of evil and cruelty that seemed insurmountable, they all shared the same fate. Losing.

History is an enemy of evil and to those who take its side. However, it can be difficult to remember. As a black man in America, it can be especially difficult to keep this idea at the forefront of my mind. I remember having a conversation with a white associate of mine distraught over the rezoning laws proposed by Florida Governor Ron DeSantis. I gave them the optimistic spiel I wrote here.

Still distraught over how the issues are continuing to happen, they asked what could be done to change things. Had I not been asked that question, I probably would have never really thought about the concept. Sometimes you get so caught up standing up for justice that you can get lost in the overarching goal, finding yourself in a loop of fighting.

Everyone has something that calms them. For some, it could be a song, and for others, it may be a person. For me it’s faith.

I’ve dealt with mental health issues since I was a child and have a strong tendency to fall into depression. These bouts can be so heavy that the phrase “Tomorrow is not promised” can feel overwhelmingly true. However, there’s a particular verse that helps me continue living, and hopefully, it does the same for you.

A recent Spinnaker Instagram poll found that over 80% of University of North Florida (UNF) students were stressed. Times are harder than ever before. For young adults beginning to enter the real world, this can be quite disheartening. Young people tend to be impressionable and idealistic. I think it’s what helps us dream and aspire to do remarkable and world-changing things. However, the constant battle for equality can be soul-crushing if the goal isn’t realized. Yet, in the most difficult times, we must keep hope alive.

When the fight gets hard, and it seems like there is no end in sight, don’t stop; keep fighting. Good is undefeated.