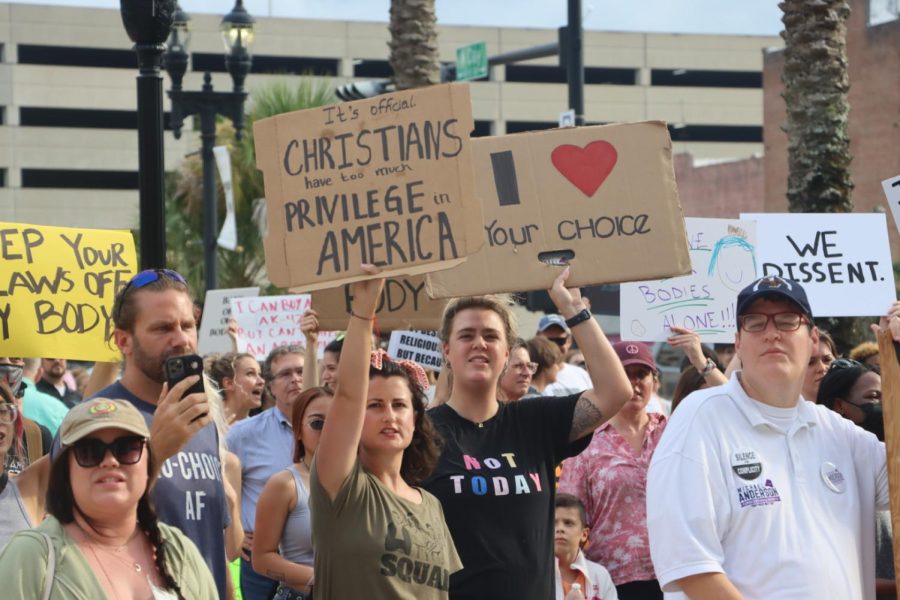 Protesters hold up signs during a rally for abortion rights on Friday, June 24, 2022.

The right to an abortion is no longer protected by the federal government, but if you live in Florida, you might not immediately notice any significant changes. Does the decision to overturn Roe v. Wade affect Floridians?

“If you are living in the state of Florida, at least immediately, you will be relatively unaffected,” explained University of North Florida (UNF) political science professor Dr. Sean Freeder.

Unlike many other Southern and Midwestern states, Florida does not have any “trigger laws” outlawing abortions once they are no longer federally protected. These trigger laws, such as the Texas House Bill 1280, were designed to take effect after revisions to Roe v. Wade, replacing the federal ruling with state laws that restrict and ban abortions.

Other states, such as California, are creating legislation that expands abortion rights in response to the Supreme Court’s decision. In Nov., California voters will decide on an amendment to their state constitution to further protect reproductive rights.

“Florida is one of the few states that is somewhere in between,” Freeder explained.

The right to an abortion is protected under a privacy law in Florida’s State Constitution. However, Florida legislators have recently passed a law banning most abortions after 15 weeks. Previously, the cut-off to getting an abortion in Florida was 24 weeks.

Since Florida is surrounded by states that now have, or will soon have, active bans and restrictions on abortion, the state will be considered a “haven state,” or a state where women with the means to travel will come to get an abortion, according to Freeder.

“[Florida’s] literally an island surrounded by states that are completely banned, so Planned Parenthood and other abortion-providing organizations have already talked about this,” he said. “Their new strategy now is to build a lot of new facilities on the borders of states where it is legal so that it minimizes the drive or fly time to get there.”

While access to abortions remains legal in Florida, Freeder said that abortion providers might face challenges from Conservative lawmakers in the state who could try to hinder their efforts to build new facilities.

Furthermore, Floridians may expect to see more limits on the amount of time they have to get an abortion. While major changes to reproductive rights laws may not occur for the next couple of years in Florida, the state has a majority Republican makeup of lawmakers, influencing how the state will swing regarding abortion access.

One reason Freeder believes Florida may not be so quick to pass more restrictive abortion laws is that Senator Ron DeSantis is up for reelection this year. Although Florida leans red, the state still has enough Democratic-leaning voters that any significant changes restricting abortion could hinder a candidate from appealing to middle-ground voters, Freeder explained.

“Passing a highly restrictive abortion bill this year would make it clearly harder to get elected in this election year,” said Freeder. “But if [DeSantis] wants to take a run at the presidency, which most observers think that he does, he’s going to want to be able to talk in the primary about his bona fides as a pro-life candidate.”

This means that after the 2022 election, once whoever is elected Governor of Florida has a secured role, new legislation can be passed without fear of losing voters for the next four years.

“There’s going to be some much more restrictive abortion bill that’s going to go into the state legislator in 2023, once [DeSantis] has already been reelected. That’s purposeful,” Freeder predicted.

Another reason Florida is not already seeing more restrictions on reproductive rights is that abortion is protected in the state’s Constitution.

“So Roe v. Wade gets overruled. [Now] there is no federal constitutional right to have an abortion, but that does not change what has already been interpreted as a fact of the Florida State Constitution,” said Freeder.

It is not immediately clear if Florida’s State Constitution will be revisited as Roe v. Wade has been overturned. As it stands, Floridians may not expect any huge changes to their access to abortion providers or contraceptives. Down the line, revisions to current state legislation on the issue may occur.

“This is just my speculation, but I have a hard time imagining Florida looking like Alabama where they just have outright [abortion] bans,” said Freeder. “The demographics of Florida don’t really fit well for a complete ban, at least from an electoral perspective […] but something that brings abortion down to six to ten weeks seems absolutely possible.”