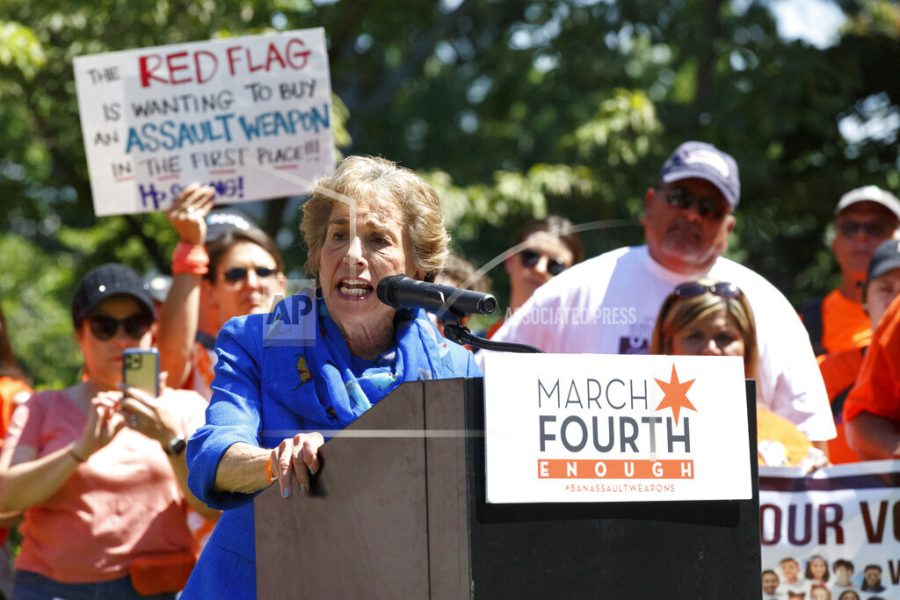 U.S. Representative Jan Schakowsky (D-IL) speaks at a rally held by March Fourth near the U.S. Capitol on July 13, 2022, calling for universal background checks for guns and an assault weapons ban in the wake of continued mass shootings. (Photo by Bryan Olin Dozier/NurPhoto via AP)

Florida gained its nickname the “Gunshine State,” not only for the state’s shape but for having the highest number of concealed carry permits which topped over 2.5 million as of June 30.

The Second Amendment in the U.S. Constitution states, “A well regulated Militia, being necessary to the security of a free State, the right of the people to keep and bear Arms, shall not be infringed.” There have been many different interpretations of this amendment, and it is constantly used as a reference when speaking about gun laws and restrictions. Let’s discuss what this amendment means and what state gun laws to be aware of in Florida.

A well-regulated militia means “responding to sudden invasions or other emergencies, the government could rely on a militia that consisted of ordinary civilians who supplied their own weapons and received some part-time, unpaid military training,” according to the Constitution Center.

Some believe there is no longer a need for each citizen to bear arms, while others say that everyone should. The amendment grants the right of the people to do so, but it is not mandatory. Although each citizen in the U.S. has the right to bear arms, there are state-by-state restrictions.

“It includes the first-ever federal law that makes gun trafficking and straw purchases distinct federal crimes for the first time,” President Biden said. “It clarifies who needs to register as a federally licensed gun dealer, and run background checks before selling a single weapon.”

In the State of Florida, you must be a U.S. citizen and 21 years old to purchase a firearm. There is no limitation to how many firearms a person can buy. The state does not require a background check for those who already have a concealed carry permit, however, the federal government does require it from those who don’t.

The most recent house bill, HB 103, which would’ve removed the concealed weapon permit requirement, was sponsored by Anthony Sabatini from District 32. The bill was filed in September 2021 and died in the Criminal Justice & Public Safety Subcommittee in March 2022.

”They’re unconstitutional,” Sabatini said in response to why he introduced HB 103. “It will be filed by another member since I am running for Congress.”

There are possession restrictions in the state, restricting any owner from carrying in public government areas such as schools, courtrooms and colleges.

In 2013, UNF faced a lawsuit from Florida Carry, a gun rights group. They argued that UNF could not set gun policies since possession restrictions only apply to school districts. The ruling was 12-3 and allowed students to secure their concealed weapons in their vehicles.

The Extreme Risk Law is still in effect after being passed in response to the Parkland shooting in 2018. It means that at any time, only law enforcement can petition a court order to prevent a person from accessing firearms on a case-by-case scenario. In other states such as California and Georgia, family members can also petition a court order.

Safe firearm storage is required to prevent accidents or tragedy (refer to 790.174 Florida Statute). Florida is a Stand Your Ground state, meaning a person can meet force with force if it is found that they or their family were threatened.

Those who come from out of state and purchase firearms in Florida must comply with their resident states’ laws and regulations.

Although a permit is not necessary to buy or own an open carry gun, buyers must fill out an ATF Form 4473, which is a firearms transaction record. If a person were to lie on the document by purchasing a gun for another person, they could face a felony offense of 10 years in prison.

Florida ranks #19 in terms of gun law strength with a score of 33.5% and 13.7% in gun violence rates deaths per 100,000 residents in 2022 measured from the Everytown Research and Policy. California has the strongest gun laws, whereas Mississippi has the weakest.

For more information on the requirements to purchase a firearm in Florida, click here.