Professors before they were professors: Dr. Heather Truelove 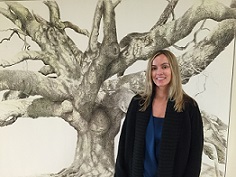 Professor Heather Truelove is an expert in environmental psychology, among many other things. One uncommon fact about her educational career is that in addition to being a University of North Florida (UNF) associate professor, she’s also a UNF alumnus.

Truelove didn’t attend UNF for her bachelor’s degree, only becoming an Osprey for her master’s degree, which she obtained in 2003. At the time, it was called a Master of Arts in Psychology. She explained how Psychology is now a Master of Science instead and is also considered a Science Technology Engineering and Math (STEM) science.

“I did my bachelor’s degree at the University of Florida (UF),” explained Truelove.

As she was completing her bachelor’s degree at UF, she found herself drawn to the environmental side of psychology, taking quite a few classes on the subject. When she looked around for her master’s degree, however, she found that UNF offered further education in these areas.

Truelove taught at UNF as an adjunct for a few years after obtaining her master’s. She then went on to pursue a Ph.D. in Experimental Psychology at Washington State University before then going to Vanderbilt for three years for her postdoctoral research.

However, as a Native Floridian, there was still a big draw for her to return.

“There was definitely a sense of homecoming,” said Truelove on returning to Florida.

Around this time, a job opened up in the Psychology Department on applied psychology. “My work really fit in there,” she remarked.

She applied for the job, returning to teach at UNF in 2012, nearly ten years after she initially graduated.

Coming back, Truelove reminisced how despite a similar footprint, the campus itself felt very different upon her return. “I came back thinking ‘Ha! I know my way around’, but there was a lot of new stuff,” she joked.

One particular thing she needed to adjust to was the new location of the psychology department, which was previously in the Brooks College of Health when she attended but had moved to its current location in building 51 by the time she came back.

A lot of the faculty had changed, but there were still some ones from her time here, which she appreciated. The sense of community was and still is there for her.

For advice to current students, Dr. Truelove had a lot to say, but one of the biggest things she tells students is to take their time and not rush things.

“You can go back to school as much as you want, but you only have a first time in college once.”

She strongly encourages students to check out things like potential other majors, internships and other unique opportunities.

“When you get out in the real world, just because you’ve finished college means the rest of your life just falls into place,” she concluded.

Dr. Truelove believes that students should take the time to get the degree they truly want, not just a degree for the sake of a degree.