Spinnaker celebrates its 45th anniversary: a trip down memory lane

Spinnaker, "A newspaper created out of necessity" by Patti Levine

Looking back in time, it’s easy to recognize that the University of North Florida (UNF) has been fondly familiar with freedom of the press. Multi-media on campus, while it may have had to jump through a few hoops to get where it is now, has been an important aspect of UNF culture and student life.

As Spinnaker enters its 45th year of publishing, a quick trip down memory lane seems only fitting.

The first of the three departments to be introduced was the newspaper. Just two years after UNF first opened in 1972, its first newspaper was established; with the help of Professor William Roach, who contributed to the development of UNF’s Communications Department, The Halyard was born.

During its short two-and-a-half-year lifespan, The Halyard earned a First Class award from the Associated Collegiate Press. The Halyard stopped printing on July 6, 1976, after funding and publication committee disputes with the Student Government Association.

Patti Levine-Brown was Spinnaker’s first managing editor in 1977 and witnessed the transition from The Halyard to Spinnaker. Levine-Brown is currently an assistant professor in the department of Leadership and Educational Studies at Appalachian State University.

At the time, The Halyard was fully funded by Student Government (SG). They became unhappy with the amount of coverage The Halyard gave them and wanted more control over what the paper published, Levine-Brown explained.

The newspaper’s goal was to remain unbiased and fair to all parties and soon SG pulled their funding for the paper, and it was shut down.

“This campus will have a free newspaper or no newspaper,” then-UNF President Thomas Carpenter said.

Carpenter endorsed an interim laboratory newspaper for $10,500 and created UNF’s second newspaper, The Phoenix, for educational purposes which ran from Aug 16 through March 7, 1977.

The Phoenix went through a few changes and was eventually reborn as The Spinnaker on August 17, 1977.

The birth of Spinnaker in 1977 welcomed its first official general manager, Bob Blade, to replace the previous executive editor of The Halyard, Bill Skutt. Blade, a 32-year-old graduate from Southwestern College in Memphis, Tennessee assumed his position while simultaneously working for The Florida Times-Union.

This first issue also included a brief mission statement of Spinnaker written by Levine-Brown, titled, “Spinnaker: ‘A newspaper created out of necessity”.

She explained that this new paper focused a lot on content and became a tool for students to learn valuable skills.

“We reinvented ourselves basically,” Levine-Brown said. “We had a really good team of people that were very committed to reporting and our focus was really on the content, we wanted good content. It was a teaching tool, both The Spinnaker and The Halyard were teaching tools and many people, like myself, went on to work for newspapers and television stations and all kinds of things around Florida and other places.”

One intriguing feature of The Spinnaker’s early issues was the ‘Classifieds’ page. There was no such thing as Facebook Marketplace in the 1980s, so people had to be resourceful and find another way to sell things, find jobs, apartments, and even roommates. 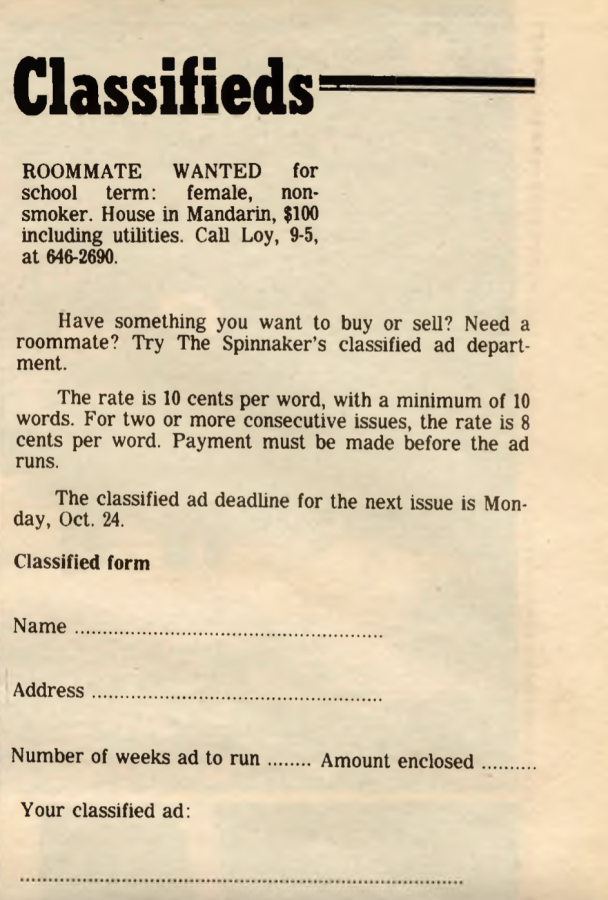 An example from the Classifieds page in the paper’s third issue, which might seem like a cruel joke in today’s housing market, was a roommate wanted ad.

You read that right, $100—INCLUDING utilities. A college student today could only dream of rent that low.

Printing its last physical newspaper in August 2013, Spinnaker News has shifted to a digital platform, offering an ever-updating website of campus-related news, feature stories, sports news and so much more. Since this shift, Spinnaker has also introduced semesterly magazines with varying themes available around campus for students to read.